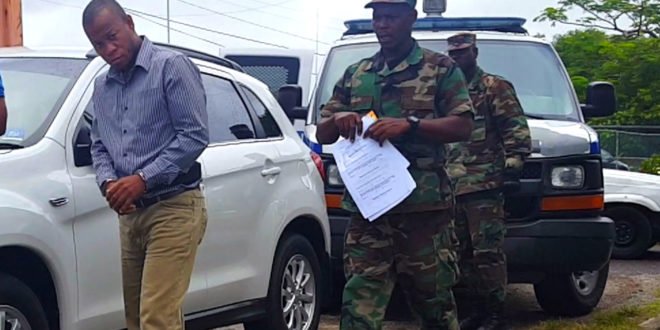 The Balata man was charged on July 6th after reportedly turning himself in to authorities the day before.

A police investigation conducted at his residence on June 28th resulted in the recovery of 26 vehicle keys, 2 alarm remotes and 68 key tags.

The 51-year-old was slapped with the charge of Preparing for the Commission of a Crime contrary to Section 194 of the Criminal Code of Saint Lucia.

He was granted bail in the sum of $3000 cash or suitable surety.

However, Monkey subsequently faced further charges for the offense of theft.

According to reports he was accused of stealing an Apple iPad tablet from vehicle registration number PA1168 belonging to Chief Transport Officer Lenita Joseph.

The tablet, which is valued at $3000, was allegedly stolen between the hours of 1:45 and 2:05pm while the vehicle was parked at Bois D’Orange on Wednesday June 21st.

Sources indicate that the incident was captured by CCTV cameras.

Francis Lalanne appeared before Magistrate Michelle Louis unrepresented at the First District Court in Gros Islet Thursday morning where the charge was read out to him.

He remains on remand at the Bordelais Correctional Facility until October 20th for sufficiency hearing in the High Court.