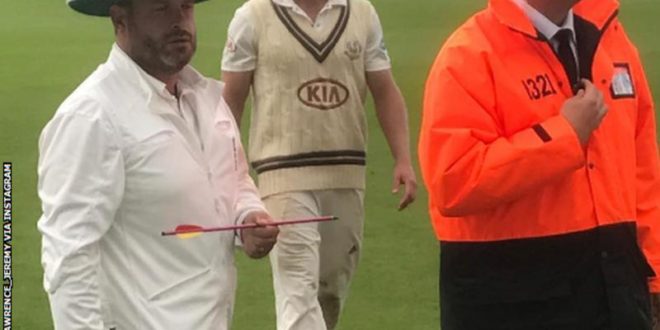 Play was suspended at 16:25 BST after the arrow landed on the square at the Oval

[BBC Sport] Surrey’s County Championship game with Middlesex at The Oval was abandoned as a draw after a crossbow bolt landed on the pitch.

Spectators were asked to take cover after the arrow was fired from outside the ground, but no-one was injured.

Police carried out a “controlled evacuation” of the ground after the incident was reported at 16:35 BST.

A Met Police statement said there have been no arrests, and they are keeping “an open mind as to motive”.

Middlesex were leading by 181 runs with three wickets in hand when the players were taken off the pitch.