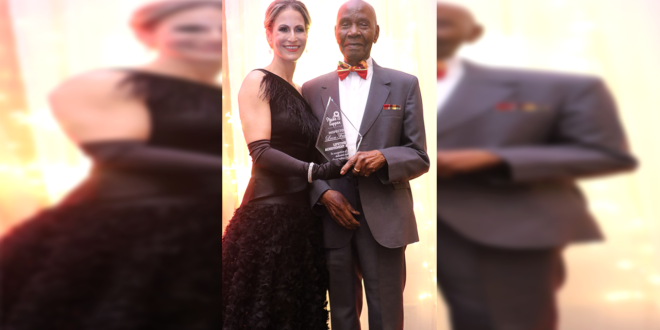 It was all about raising funds for Saint Lucia’s Police Force and the Fire Service when the Make It Happen Foundation staged the Second Annual Officers’ Ball at the Sandals Grande Beach Resort and Spa on the evening of Saturday 16th December 2017.

Hundreds of persons attended the function which has become a popular charity event on the local December calendar, largely because the event is more than just about glitz and glamour and is about giving back to an essential service in our society – ­­­our hard-working police and fire personnel. The event also has the added excitement of encouraging guests to support the local fashion industry through its “dress Saint Lucian” theme.

Organizer of the event and chairperson of the Make It Happen Foundation, Mrs. Raquel Duboulay-Chastanet, wife of Prime Minister Honourable Allen Chastanet, profusely thanked all attendees and sponsors, and explained that whilst the organization has been able to provide some relief to officers, there is still so much to accomplish.

“Tonight is a night for us to celebrate and honour the men and women of the police force and fire service who work year round to protect us and keep us safe,” Mrs. Duboulay-Chastanet said in her address to the gathering. “The Make it Happen Foundation was launched over a year ago with the aim of raising funds for and being able to address small infrastructural needs around the island. However, when we looked at the urgent needs of our officers, in particular the dire conditions of many of the police and fire stations, we decided to make remedying them our first project.”

“All of these donations make such a difference and really have allowed us to maximize the impact that we would have had otherwise,” Mrs. Duboulay-Chastanet stated. “I spoke last year about the many sacrifices our police and fire officers make on a daily basis in the most difficult of circumstances and I do hope after tonight many of you are inspired to work with us to try and improve their working conditions. We know that taking care of our officers is the Government’s responsibility but until such time as Government is truly able to provide them with the level of support that they require I believe that it is up to us as the private citizenry to step up and help where we can.”

Mrs. Duboulay-Chastanet also explained that a little goes a long way and in some cases police and fire stations needed basic administrative office items, kitchen items such as pots and pans, fans, chairs and other miscellaneous items.

The event also featured a raffle, door prizes and the stirring and increasingly competitive auction segment which raised double what it did last year. Awards were given to persons who best represented the Saint Lucian dress theme and the host herself was ever thankful to local dress designer Queen Esther of Kuumba Designs for her two couture gowns.

Following this year’s event the Make It Foundation has plans to work with the teachers and nurses associations.