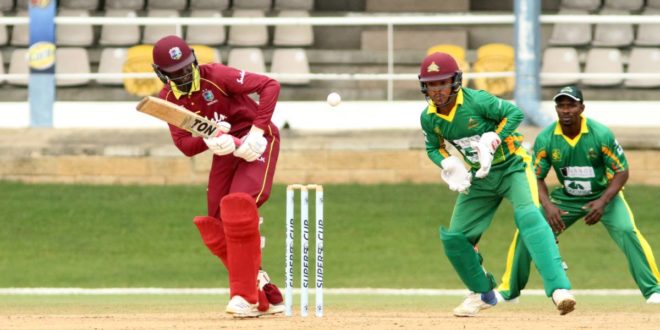 (Press release- T&T News Day) A DAMP spot on the bowlers’ run-up caused the abandonment of the West Indies B match against the Windward Islands Volcanoes, in Group A of the Regional Super50 Cup, at the Queen’s Park Oval, St Clair yesterday.

The defending champions Volcanoes, chasing a target of 221 in their allotted 50 overs, were 48 without loss before the damp spot, from the northern end, caused discomfort to the WI B pacers.

The groundsmen tried in vain to repair the affected area but the officials determined that the spot was too dangerous and called off the match after 8 pm.

The West Indies B, who decided to bat first after winning the toss, were bowled out for 220 in 48.3 overs, with opener Keagan Simmons top-scoring with 57 off 82 deliveries, inclusive of five boundaries. Tevin Imlach contributed 43 (57 balls, three fours) and Kimani Melius a quick-fire 33 (22 balls, two fours, three sixes).

At the Brian Lara Stadium in Tarouba, the Guyana Jaguars, up to press time last evening, were on 89/3 after 14 overs, pursuing a target of 203, against Canada.

Christopher Barnwell (26) and Raymon Reifer (10) were the not-out batsmen, after Chanderpaul Hemraj blazed his way to 33 (22 balls, seven fours).

The Canadians, who batted first after winning the toss, were restricted to 202/9 off 47 overs – the overs were reduced after a delayed start due to rain.