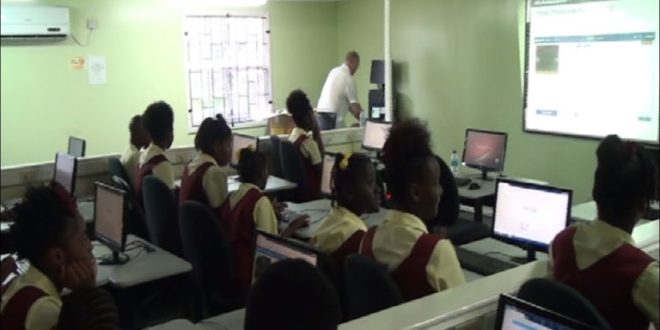 Students of SCSS benefit from Robotics and Programming workshop

[Press Release] A professor from the University College in London (UCL) in collaboration with Brightlight Consulting and Development has organised the delivery of a workshop on Robotics. Dr. Stephen Hailes, Head of Science Department at UCL is a professor of wild systems.

This unique profession allows him to engage in the monitoring of geological activity, the tracking of wild animals; all via the utilization of sensors.

According to him, “The workshop was geared primarily towards educating students about programming and its applications to Robotics.”

The students of the Soufriere Comprehensive Secondary School were bestowed with the knowledge on the use of BBC Micro bits; an ARM- based embedded system designed by the BBC for use in the computer education in the UK.

Chief Education Officer for District 8, Miss Laura Francis stated “The workshop was very timely. Given that the schools have embarked on a Coding and Robotics Program, the students can now be more aware of the program.”

Professor Hails is also on island implementing sensory systems for the monitoring of the chemical composition of the gaseous compounds released by the geothermal activity at the Sulphur Springs Park.

The workshop was held at the Soufriere Access Centre on Tuesday March 20th, 2018.

According to the Director of Brightlight Consulting and Development, Dominic Alexander, “it is the first of a series of workshops to be conducted through the partnership.”

The Soufriere Foundation is a not for profit organisation located in Soufriere. Its mandate is to undertake social, economic, cultural and other sustainable developments in the Soufriere region. The organization which was established in 1993 generates revenues from its operational sites: the Sulphur Springs Park, Gros Piton Nature Trail, Comfort Center, Soufriere jetties and 88.5 Soufriere FM.