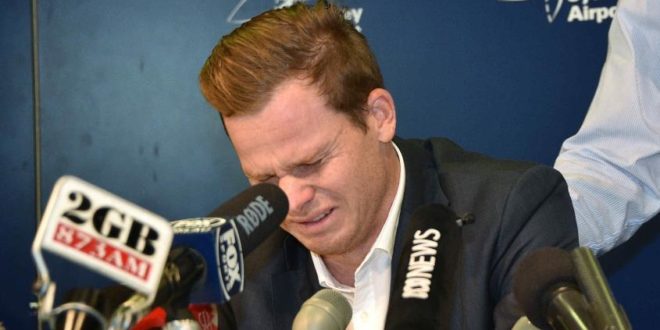 ICC- ‘I won’t be challenging the sanctions. They’ve been imposed by CA to send a strong message and I have accepted them,’ tweeted Smith.

Steve Smith will not be appealing his 12-month ban handed out by Cricket Australia (CA), confirming with a tweet that he has accepted the punishment and continues to take full responsibility for his role in the ball-tampering incident in the Cape Town Test against South Africa recently.

There had been some speculation as to whether Smith will appeal the sanction that prevents him from playing international or domestic cricket for a period of 12 months – the same as David Warner – and precludes him from holding any leadership position in the national set-up for a further 12 months.

On Wednesday 4 April, he put the speculation to rest by tweeting: “I would give anything to have this behind me and be back representing my country. But I meant what I said about taking full responsibility as Captain of the team. I won’t be challenging the sanctions. They’ve been imposed by CA to send a strong message and I have accepted them.”

Warner and Cameron Bancroft, who has been banned for nine months, haven’t yet made public their stances on the matter.

The incident in question took place during the third Test between South Africa and Australia, when TV cameras caught Bancroft using what was later found to be sandpaper on the ball.

Smith, Warner and Bancroft were subsequently sent back home from South Africa with one Test in the series left.

Speaking at a press conference at Sydney Airport upon his arrival, Smith had said, “I want to, as captain of the Australian cricket team, I take full responsibility. I made a serious error in judgement. It was a failure of leadership, my leadership. I will do everything I can to make up for my mistake and the damage it’s caused.

“If any good is to come from this it can be a lesson for others and I hope I can be a force for change. I know I’ll regret this for the rest of my life.”