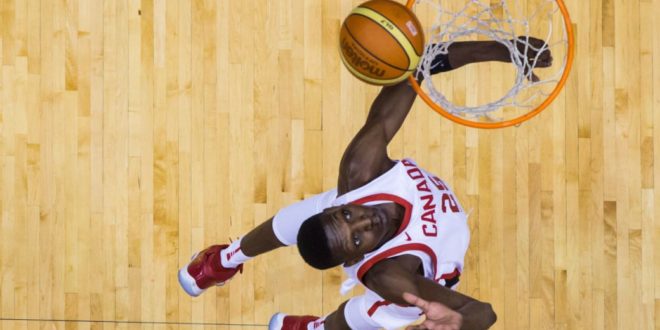 SBNATION- The Toronto Raptors reported Friday afternoon that Summer League forward Chris Boucher — along with G League MVP Lorenzo Brown — had been signed to undisclosed contracts. With the trade on Wednesday sending out the Raptors possible future starting centre Jakob Poeltl, the depth chart was chillingly empty in the post. The Raptors hope the 25 year old native of Montreal helps shore up that position.

Boucher took charge of his opportunity in the Summer League, and in just over 20 minutes per game averaged nearly 11 points and 3.3 blocks.

As it stands, Boucher could very well be the fourth big-man on the court for the Raptors next season, who have just Serge Ibaka, Pascal Siakam and Jonas Valanciunas under contract to play the power forward and centre positions. Unless the Raptors suddenly consider resigning Lucas Nogueira a top priority, Boucher will likely become the end of rotation big-man at the beginning of next season.

Boucher — who, at 24 years old, entered the league via a two-way contract with the Warriors in 2017 — displayed a modern-NBA combination of shot blocking and 3-point shooting in his time with the Santa Cruz Warriors — the G League affiliate of Golden State. He is however, very thin and could have trouble staying on the court in bigger lineups. All in all, he’s a specialty player who provides Nick Nurse with another option in an increasingly versatile defensive roster.