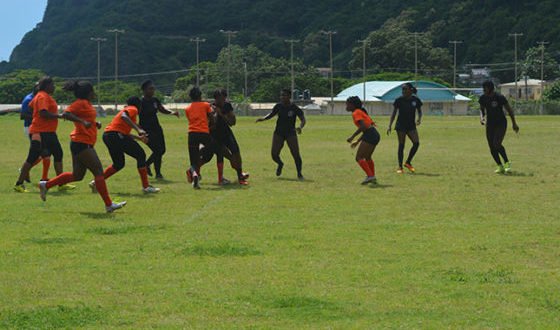 PRESS RELEASE:-On 3 September2017, the first leg of the Community 7s Tournament hosted by the St. Lucia Rugby Football Union took place at Soufriere Mini Stadium. There were 8 matches for the day including 2 matches between female teams of VBCC Stingers Team and Whiptail Warriors Rugby Football Club.

Aside from minor hiccups, the planned matches went on with impressive results. Both female matches were won by VBCC Stingers Team 14 – 10 in the first match while dominating the second one 14 – 0. Ashley Nelson of VBCC Stingers secured two consecutive tries in the first match that led to the team’s victory. The male category did not disappoint. As expected, the rivalry between clubs was apparent in their performance. Some surprising plays were displayed showing improvement in skills in many of the players. Rogues Rugby Football Club commanded day one of the tournament winning the match against Whiptail Warriors 28 – 5 and 22 – 14 which the team worked hard for as VBCC Stingers Team put them to task with every try. Jean Mael Philip of Rogues Rugby Football Club scored three tries in the tournament. Soufriere Lions Team showed heart and remarkable athletic skills as they held their own  in the exhibition games against the more experienced teams from Castries. They are definitely a team to watch out for.

Community 7s Tournament second leg will be at Laborie Playing on 9 September 2017. The Union is looking forward to bringing the sport to various communities and increase awareness and interest in rugby on the island.

2017-09-04
Previous Latest Gas Price Rates
Next The Little Club That Could – The Rotary Club of Gros Islet, Saint Lucia, 1993 and beyond