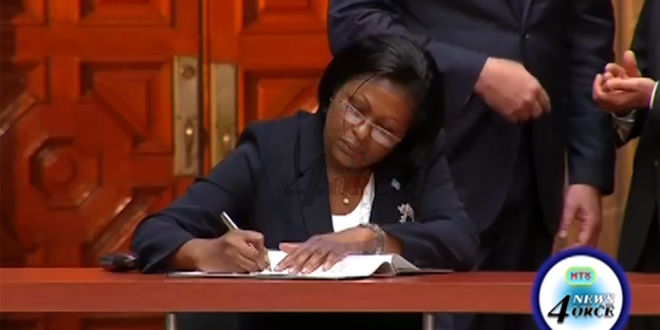 (CMC) — The St Lucia Government says the location of a foreign mission is solely a decision for a sovereign country to make as Caribbean countries continue to explain their differing positions on Thursday’s non-bind United Nations resolution that called upon all states to refrain from the establishment of diplomatic missions in the Holy City of Jerusalem.

St Lucia was one of two Caribbean Community (CARICOM) countries absent when the vote was taken on whether or not to support the decision by the United States to recognise Jerusalem as the capital of Israel.

No CARICOM country was in support of the US move with Washington gaining the nod from Israel, Guatemala, Honduras, the Marshall Islands, Micronesia, Nauru, Palau and Togo.

However, Antigua and Barbuda, Bahamas, Jamaica and Trinidad and Tobago were among the 35 countries that abstained during the vote, while Barbados, Belize, Dominica Grenada, Guyana, St Vincent and the Grenadines and Suriname were among the 128 countries that voted in favour of the resolution. Foreign Affairs Minister Sarah Flood-Beaubrun said St Lucia’s absence from the vote was unrelated to a threat issued by United States President Donald Trump that Washington would re-consider its relationship that supported the resolution.

The US ambassador to the UN, Nikki Haley, had also warned that she would be “taking names” of those countries that voted in support of the resolution.

“The United States will remember this day, on which it was singled out for attack in the General Assembly for the very act of exercising our right as a sovereign nation.

But Flood-Beaubrun told an online publication (;) that Castries was of the opinion that the matter of the location of a foreign mission is solely a decision for a sovereign country to make.

“In any event, on the Israeli-Palestinian question, both sides are claiming exclusivity and the matter is primarily for the parties themselves to decide,” she added.

Barbados, Dominica and Trinidad and Tobago have been outlining the reasons for their positions on the vote while St Vincent and the Grenadines had outlined its position before the matter came to the United Nations.