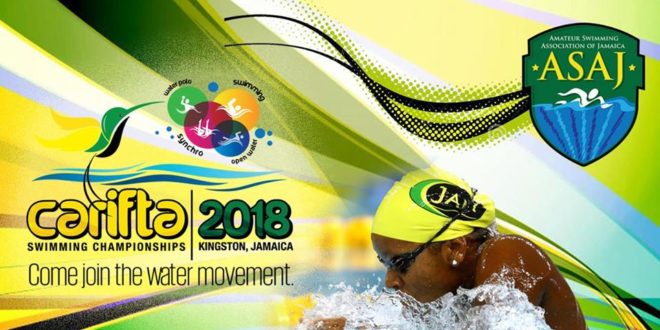 The 33rd edition of the Carifta Aquatics Championships will be held from March 15th to April 4th 2018 at the National Aquatic Center Kingston, and James Bond Beach, St Mary, Jamaica.

Over 550 athletes are expected to converge to vie for the Caribbean bragging rights in swimming, artistic (synchronized) swimming, water polo and open water swimming. There will be nine days of hard fought competition among the region’s elite age-group aspirants and many outstanding performances are expected.

Ten of St. Lucia Swimmers have met the qualifying standard set by the SLASA Technical Committee and have been selected to represent St. Lucia at this years’ competition.

Competing in the 11 – 12 year age group for the first time at this level is D’Andre Blanchard and Naekeisha Louis. D’Andre holds 5 Double A times of which he needed only 3 to qualify and Naekeisha holds a triple A earned at the ASATT competition in Trinidad this past December. Naima Hazell who recently entered her last year in the 11 – 12 year age group and a bronze medalist in the 2017 Carifta Swim Meet, is expected to perform exceptional at this years’ competition.

Entering into their 1st year in the 15 – 17 year age group is Jayhan Odlum Smith who is expected to also represent St. Lucia at the Youth Olympic Games later this year in Argentina, Jamaar Archibald eager to make his mark and Terrel Monplaisir silver medalist at the 2017 Carifta swim Competition.

Absent from the team this year is Katie Kyle who also made the qualifying standard however she is currently preparing for the Commonwealth Youth Games in Australia slated for April 5th to 9th 2018.

St. Lucia Amateur Swimming Association is pleased to announce its participation in the Open Water segment of the Carifta Swim Championship. Veronica Brown who previously competed that this level is expected to compete in the 5K at the James Bond Beach, Oraccabessa, St Mary, Jamaica.

Head Coach Brian Charles was selected by the Technical Committee to lead the 10 member team on their journey to overcome their challenges and conquer their goals in Jamaica.

Constance Rene was selected by the SLASA Executive the Manage the St. Lucia Swim Delegation.

SLASA’s President Eddie Hazel has expressed his confidence that the best performing swimmers have been selected to fight for success in the water and improve on last years’ medal count.