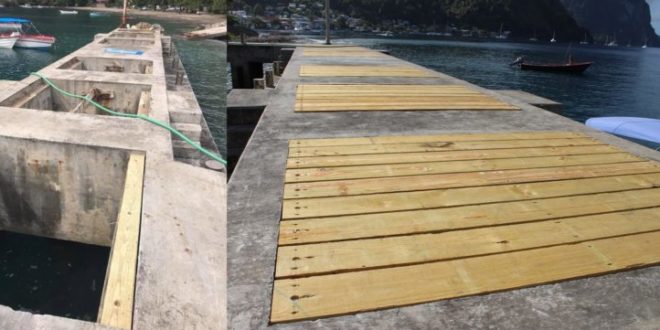 The Fisheries jetty which forms part of this port was left in a dilapidated state following the passage of Hurricane Maria; the deadliest storm of the hyperactive in the 2017 Atlantic hurricane season.

On Monday January 22nd, 2018, the SRDF announced the completion of refurbished works undertaken on the Fisheries jetty.

Senior Project Officer, Mr. Malcolm Mathurin explained, “The extent of the repairs had to be extended. The scope of works included the replacement of surface boards and joist.”

He further clarified that the surface boards were placed in a mode that can be removed during severe weather conditions in an effort to maximize costs.

According to Dock Deputy Supervisor, Mrs. Androuy Mc Donald, “This was a very good initiative given that the Fisheries jetty was in a deplorable condition. Majority of the boat captains prefer using this jetty because it is in close proximity to the fuel station.”

She added that one Dock Warden and Cashier will be assigned to the Fisheries jetty.

The local fishermen commended the organization for assisting in alleviating their pain in earning their livelihood.

The renovation of the fisheries jetty accumulated a cost of $10,000.00.

The Soufriere Foundation is a not for profit organisation located in Soufriere. Its mandate is to undertake social, economic, cultural and other sustainable developments in the Soufriere region. The organization which was established in 1993 generates revenues from its operational sites: the Sulphur Springs Park, Gros Piton Nature Trail, Comfort Center, Soufriere jetties and 88.5 Soufriere FM.

2018-01-26
Previous Gayle, Pollard and Bravo up for grabs at this year’s IPL auction
Next Toddler succumbs days after Micoud auto-crash