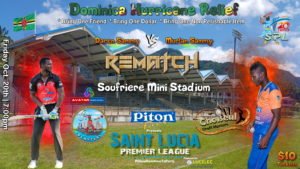 The St. Lucia Premiere League (SPL)T20 has announced a rematch between Chosieul Craftmaster and SPLT2017 champions Avatar City Blasters due to popular request for MORE CRICKET!
Venue: Soufriere Mini-Stadium.
Date: October 20th 2017.
Time: 7pm.
This match will also be used as an avenue to help the island of Dominica.  Cricket fans are asked to bring along non-perishable items, and/ or monetary donations along with their support for the players and Dominica.
The Party has just began and now SPLT20 will allow the fans to #showdemhowtoparty #forDominica.