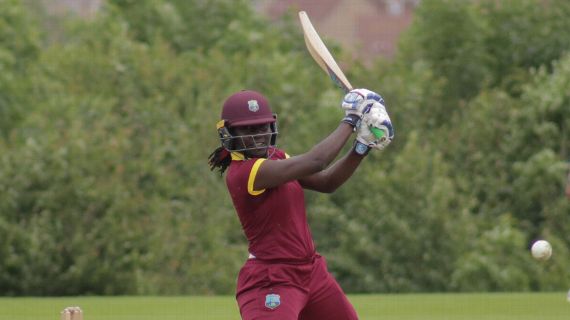 Stafanie Taylor smashes one off the back foot CWI Media Photo

West Indies’ spinners, led by legspinner Afy Fletcher, sparkled again to skittle Sri Lanka for 162 and set up a series-clinching seven-wicket victory at the Brian Lara Stadium in Tarouba. Fletcher, Anisa Mohammed, and Stafanie Taylor claimed combined figures of 29-3-71-7 to slice through Sri Lanka’s batting line-up, after which West Indies chased down the target in 39.4 overs.

Sri Lanka had collapsed from 63 for 1 to 136 all out in the series opener. They endured a similar collapse on Friday, sliding from 104 for 2 to 162 all out in 46.3 overs. Opener Yasoda Mendis and No. 3 Chamari Atapattu were the only batsmen to pass 30 in the first innings. Atapattu made 31 off 37 balls, while Mendis was more fluent, hitting 34 off 31 balls – the only batsman to strike at more than 100 in the match. Seamers Shakera Selman and Shamilia Connell took one wicket each for West Indies.

Openers Hayley Mathews and Kycia Knight began the chase steadily, adding 49 for the first wicket. The partnership, however, ended in the 14th over when Atapattu bowled Knight for 24. Mathews and Chedean Nation fell soon after, but captain Taylor and Deandra Dottin put on an unbroken 77-run stand in 13.4 overs to see the side home.
Taylor struck three fours and a six during her 83-ball 60 – her 28th fifty in ODIs – while Dottin hit four fours and a six during her run-a-ball 37.

The third and final ODI will be played at the same venue on Sunday.