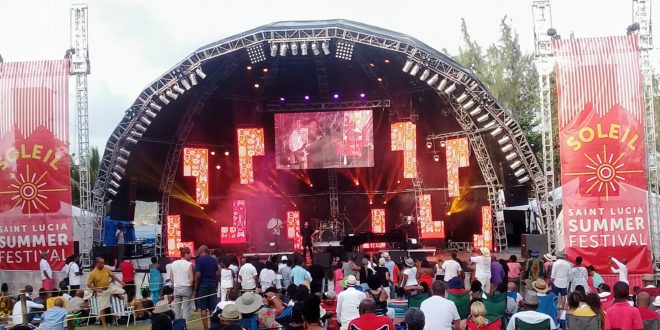 PRESS RELEASE – Pigeon Island came alive on Saturday May 13 with a potpourri of French, Latin, Afro-Cuban and Hip Hop flavored jazz. It was the closest thing to a musical trip around the world in four hours.

Bluemangò has appeared at St. Lucia Jazz several times before, but this year they took it up a few notches. Their set featured an eclectic mix of Folk, French and Kweyol jazz – instrumental and vocal. Bluemangò is a group of musicians who come from St. Lucia, Martinique, and Dominica.

Appearing as special guest performers with Bluemangò this year were trumpeter Jean Caze of Haiti, and Guadeloupe-born jazz singer Malika Tirolien. She performed at the Royalton with her band on Friday night May 12 and with Bluemangò at Pigeon Island on Saturday. She lives in Montreal, Canada.

Malika has performed in Europe, China and India, but this was her first time in St. Lucia. “I really enjoyed my time here. St. Lucia reminds me a lot of Guadeloupe – the people, the food, the French Creole. I’m looking forward to coming back and staying a little longer next time.”

Bandleader and pianist Richard Payne says “Bluemangò is a celebration of the idea of one Caribbean space, and the exciting part is the opportunity for us to connect and collaborate through music. Our Creole culture is the glue that keeps us together.”

The group is currently working on material for its next CD and trying to confirm a gig in Cuba. Payne urged Events St. Lucia Inc. to “harness the brand equity that St. Lucia Jazz has garnered over the last 25 years, and find a way to transition that equity to the Soleil brand.” He added: “This has immense promise, and I have no doubt that Soleil can be a festival to be reckoned with.”

Kenny Garrett was a throw-back with his authentic jazz sound which must have pleased the purists at the Parkon Saturday afternoon. It wasn’t long though, before he broke into some Hip Hop flavoured jazz which got the crowd moving and chanting. Garrett stunned many in the crowd when he broke into some beat boxing a la Doug E. Fresh.

Richard Bona is no stranger to St. Lucia Jazz. The bassist and singer has been here twice before, first at Balenbouche and then at Jazz on the Square. Bona, who is from Cameroon, sings in his native language. Bona recently made a foray into Latin flavoured jazz.

He is now working with Mandekan Cubano – a group of musicians from Cuba. Bona has a warm, soothing voice that’s almost hypnotic. You may not understand the words he is singing but you are entranced by every note. He switches effortlessly from his natural singing voice to falsetto.  He engaged the crowd in a ‘call and response’ that was as much fun for the patrons as it was for him.

Bona invited Kenny Garrett to join him on stage for the latter part of his set. They entertained the crowd with some musical sparring, matching each other, note for note. Bona ended his set with a Macosa dance number that got people on their feet. Latin dance was on show in the crowd.

Reflecting on his performance, Bona said: “It’s always fun to be here. The vibe is always good. The people are nice, the fans are always very receptive, and that’s what music is all about – bringing joy to people.”

About his new connection with Mandekan Cubano, Bona said: “Afro-Cuban music is about 500 years old. It’s a very beautiful combination of different cultures. It fuses African, European, Latin and Indian musical styles and influences. Horns and piano came from Europe, congas from Africa, and the maracas came from India. This is all part of my own evolution, because I’m a student of music, for life.”