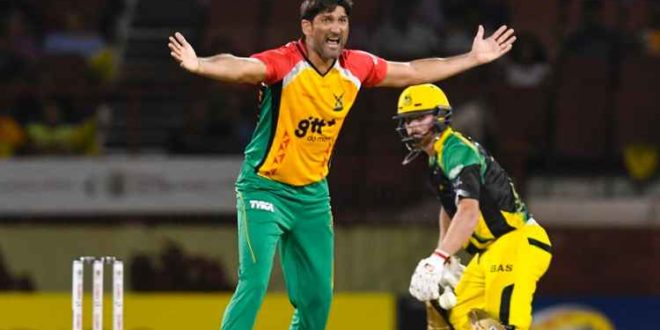 Sohail Tanvir‘s electrifying opening spell of 4 for 2 ended up short-circuiting the Barbados Tridents batting order as Guyana Amazon Warriors completed a crucial season-sweep over their main competition for the final CPL playoff berth with a crushing 99-run win.

In reply to Warriors first innings total of 158 for 8, Tridents were 19 for 5 at the end of the Powerplay after Tanvir ripped out the heart of the Tridents lineup. The left-arm quick came back later to claim his fifth to cap the most economical five-wicket haul in T20 history, ending with figures of 5 for 3 on a sorry night for the Tridents in which they were bowled out for 59, the second-lowest total in CPL history. The result means that the Warriors now have a four-point lead over the Tridents for fourth place on the CPL points table, putting Tridents in danger of missing the playoffs for the second year in a row.

Warriors’ batting performance on the night summed up the saying that the whole is greater than the sum of its parts. In their first match since captain Martin Guptill went home due to a family emergency, Warriors rallied together with a gritty display that featured several punchy knocks but nothing above Jason Mohammed‘s 42 off 35 balls.

Warriors were 65 for 4 after eight overs when rain halted play for 40 minutes and grinded their way to 117 for 5 after 17 before Mohammed and Roshon Primus produced a pair of back-breaking overs that put Warriors into the ascendancy. Mohammed was on 28 off 30 balls to start the 18th but tucked into Ravi Rampaul for two fours and a six before falling on the fifth ball of the over. Primus followed Mohammed’s lead in the 19th, smacking Wahab Riaz for consecutive sixes as a fighting total suddenly turned into one that was well over par.

Spell of the season

Tanvir was virtually unplayable in the Powerplay, with the only two runs off his bowling coming off an edge to third man and a leg-side wide. Bowling over the stumps to the right-handers, he was getting significant movement in the air and off the pitch in his first over to Kane Williamson, beating the Kiwi past the outside edge four times before ending the over with a slash to third man for his first wicket.

He should have been on a hat-trick when Dwayne Smith edged to Assad Fudadin at slip to begin his next over but a simple chest-high chance was shelled. It mattered not as Smith was given out next ball, though there was some doubt as to whether he edged it or the noise was bat on pad as the ball went through to wicketkeeper Luke Ronchi.

Eoin Morgan’s season-debut for Tridents lasted all of one ball when he was beaten badly for pace and movement to be trapped in front of middle stump by a Tanvir inswinger to begin the fifth over. Kieron Pollard replaced him in the middle and in a bit of gamesmanship, pulled out of the crease just as Tanvir was set to deliver the next ball. The ploy riled up the entire Warriors infield but if the intent was to throw Tanvir out of his rhythm, it failed miserably as an outswinger angled across the right-hander was fended to Ronchi.

Blood in the water

Sensing wounded prey at 14 for 5 in five overs, Rashid Khan had three men around the bat when he came on to bowl his first ball. Another brief shower interrupted play in the seventh over with Tridents struggling at 26 for 5, but Rashid struck four balls after play restarted. He got Nicholas Pooran to loft a catch to Chadwick Walton at long-off, as the spinner joined the party too.

After Walton pouched another catch on the boundary off Keemo Paul’s bowling in the 11th to remove Akeal Hosein, Rashid nabbed his second when he beat Wayne Parnell’s attempted sweep for a simple leg before decision. His third wicket clinched victory when he bowled Shamar Springer four balls into the 14th for his CPL-best figures of 3 for 15.

Yet the night belonged to Tanvir. His fifth wicket came on his final ball of the night when Wahab Riaz played on to end the 13th. Tanvir’s 5 for 3 equaled Rashid’s mark against Ireland earlier this year and Rangana Herath’s epic spell in a virtual-knockout against New Zealand at the 2014 World T20. But those spells came in two and 3.3 overs respectively. Tanvir’s economy of 0.75 across four overs put him in the record books for possessing the best economy in a five-for.