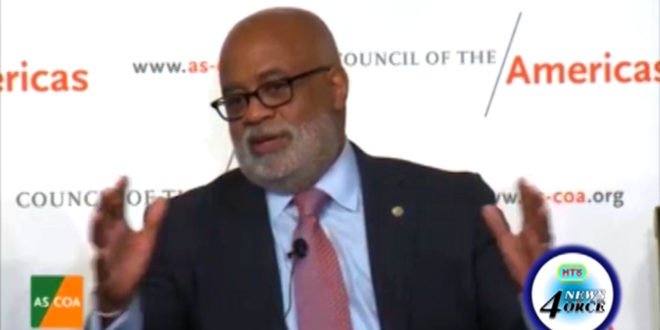 SLU’s Ambassador In The US Wants Action On Venezuela

Saint Lucia’s Ambassador in Washington says the Organization of American States (OAS) must maintain its reputation through decisive action on the crisis in Venezuela.

As Venezuela spirals downward, the OAS convened a special meeting of foreign ministers from the region to discuss the escalating crisis.

The meeting followed president Nicolas Maduro’s announcement in April that Venezuela will withdraw from the OAS, and comes amid a growing frustration among member governments about worsening conditions, amplified by government actions.

Ambassador Edmunds was part of a special public panel discussion on the humanitarian crisis and what the OAS promoted as strategies to chart a return to democracy amid growing violence.

Ambassador Edmunds says most OAS member states realize that this situation has gone on for too long and that something must to done to end the unrest in Venezuela.

He says however that the OAS is doing what it can within its limits.

Other speaks at the discussion were Mark Fierstein, a former senior director of western hemisphere affairs at the OAS and Francisco Toro, founder and editor of the Venezuelan chronicles.

The discussion was moderated by Jackson Deal, deputy editorial page editor at the Washington Post.