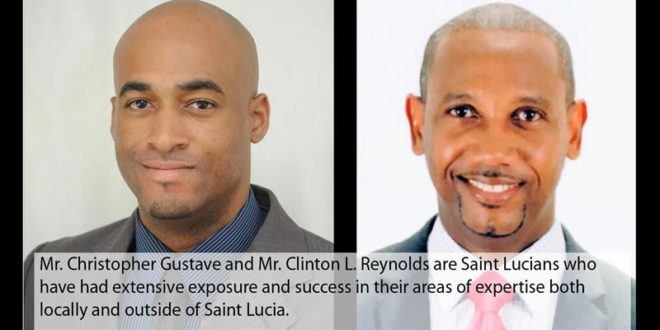 GIS – GIVEN THEIR VAST EXPERIENCE AND TRACK RECORD, THE SLTA IS CONFIDENT IN THE POSITIVE IMPACT THEY WILL MAKE ON THE ISLAND’S TOURISM PRODUCT.

The Saint Lucia Tourism Authority has added two experienced, dynamic leaders to its team in April as part of efforts to reposition the organisation to handle the demands of the vital tourism industry.

Mr. Clinton L. Reynolds and Mr. Christopher Gustave are Saint Lucians who have had extensive exposure and success in their areas of expertise both locally and outside of Saint Lucia. Mr. Reynolds will lead the public relations and communication charge of the SLTA as the Chief Communications Officer; while Mr. Gustave has been appointed to the position of Regional and Events Marketing Manager.

Mr. Reynolds is a veteran broadcast journalist and a well-known media personality who has plied his craft with local, regional and international broadcast media outfits for over 20 years, bringing innovation and strategic leadership to every position he has held. He graduated from Cameron University in Lawton, Oklahoma, USA with an MBA in Finance and a Bachelor of Arts Degree in Communication (Radio/TV). Mr. Reynolds is a former President of the Media Association of Saint Lucia, leading the organisation from its inception in February 2012 to November 2016. He also brings to the position of Chief Communications Officer a decade of experience in media and communication consultancy, where he has lent his expertise to a wide range of organisations and agencies.

“It is most humbling to be entrusted with such an exciting opportunity to work alongside the SLTA team as we reveal our island’s natural beauty to the rest of the world,” Mr. Reynolds stated. “I feel a great sense of purpose in making a worthwhile contribution to the development of our country in this most important sector.”

Mr. Reynolds has been recognized as a strong leader and continues to volunteer in programmes that uplift marginalized groups. He joined the SLTA family on April 23.

Mr. Christopher Gustave was introduced to the SLTA as the Caribbean and Events Marketing Manager on April 11. Mr. Gustave brings 15 years of marketing and leadership experience to the position, having led diverse marketing teams across the Caribbean. He has developed a reputation for his enthusiasm, creativity and leadership that motivates people into action. Mr. Gustave is experienced in formulating and implementing results-based marketing campaigns and also brings strong analytical capabilities to the SLTA.

“Growing up, it has always been my dream to work in this area of tourism,” said Mr. Gustave. “I am honoured to be in this position where I can contribute, significantly, to the development of my country.”

Mr. Gustave is certified as a Hospitality Educator (CHE) by the American Hotel & Lodging Educational Institute. He also holds an MBA with distinction, with a concentration in Innovation and Entrepreneurship from the University of the West Indies, Saint Augustine Campus in Trinidad and Tobago, and a Bachelor’s Degree in International Business Administration from the Oxford Brooks University, School of Finance and Management, in the United Kingdom. He has also been involved in academia as a lecturer in management at the UWI Open Campus.

The SLTA welcomes Mr. Reynolds and Mr. Gustave to its team and is excited about the positive impact they will make on the island’s tourism product given their vast experience and track record.