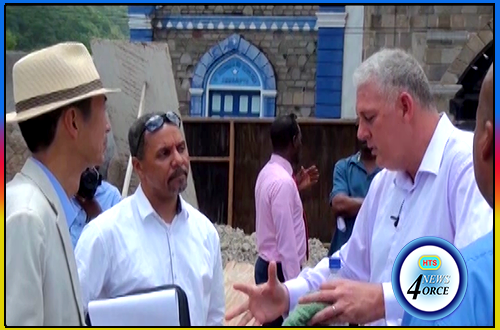 The Group argues that only an uncaring government would close the only Healthcare facility in the town of Soufriere with no end in sight. The Group says that it is alarmed that the Soufriere Hospital, which plays the critical lifesaving role of responding to medical emergencies in the constituency of Soufriere/Fond St Jacques, remains close, for more than six months, after sustaining very minimal damage following two mysterious fires.

The Group says it is equally disturbed that Hon. Herod Stanislaus and Prime Minister Allen Chastanet have suspended works on the Soufriere square, for two years now, for no valid reason. It is indeed sad, says the Group, that the Soufriere square: a product of constituency consultation, which was fully funded by the Taiwanese Government and was eighty percent complete at the time of the suspension of works, was abandoned.

This irresponsible action, it argues, has led to the deterioration of the Soufriere square, which is now an eyesore and hazard in the heart of the town of Soufriere; a major component of the tourism infrastructure of Saint Lucia.

Further, it says the youth of the constituency are enraged by the government’s decision to place an artificial surface on the playing area of the Soufriere Mini Stadium, which according to the youth of the constituency “will prevent the use of the grounds for the game of cricket.” It must be noted that it is not possible to build a cricket pitch on synthetic surfaces.

The Constituency Group is calling upon the Parliamentary Representative for Soufriere/Fond St Jacques to explain why his government is hell-bent on reversing the gains that were made under the former SLP government while he sits idly by and does nothing to protect and advance the interests of the constituents of Soufriere/Fond St Jacques. Meanwhile the Group says it is more than ready to stall all efforts by this government to impose any limitations to the use of the grounds at the mini stadium and more specifically to exclude the playing of cricket.

The Soufriere Constituency Group invites the public to a public meeting on Wednesday 6 June where these and other matters of national interest will be discussed.