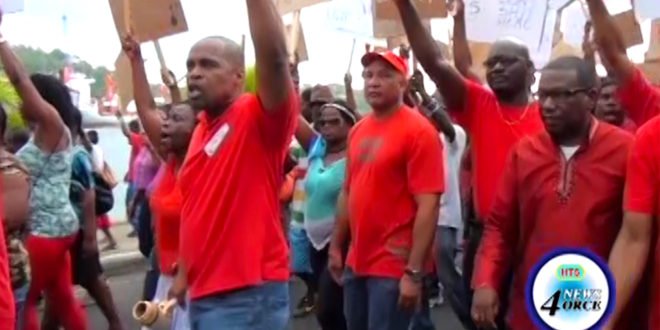 The opposition Saint Lucia Labour Party took to the streets of the capital in protest of the proposed DSH development, and a host of other capital projects spearheaded by the UWP administration.
Critics argue that the developments are detrimental to the people of Saint Lucia, especially residents in the south and the island’s fragile eco-system.
The SLP says the demonstration is also in response to what it claims is the disregard for the plight of some sections of the populace.
Placard bearing protesters picketed from the Vigie Playing Field through to the John Compton highway and through the narrow streets of the city, at times braving intermittent showers.

Meanwhile the ruling united workers party is also hosting a public meeting in Vieux Fort.
The meeting, which was officially slated to begin at 7:00pm, is aimed at touting the government’s ambitious economic agenda to transform the south of the island, grow the economy, and create jobs.
.
The UWP meeting was preceded by a march organized by the Vieux Fort coalition of stakeholders for development, which has sprung up, announcing a 3:00pm march in (quote) “support of jobs and development for the south”