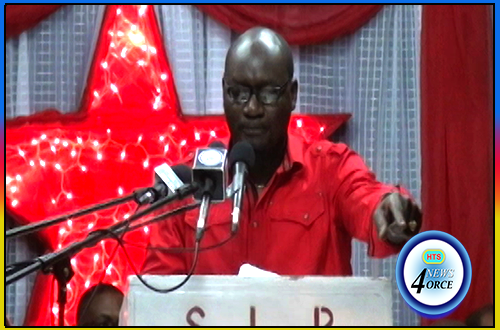 Press Release:-  Since the UWP took office in 2016, and the appointment of Senator  Hon Mary Isaac as Minister for Health and Wellness, we have witnessed a rapid decline in the government’s attention to the serious issues of health in Saint Lucia and the situation is getting worse by the day.

What has happened to the refurbishment of the burnt La Ressource Health Centre? The situation at Richfond Health Centre has become critical.

Why has the government not started work on the Anse La Raye Health Centre? Allocations and negotiations were done by the Saint Lucia Labour Party government, yet this health centre has not started.

The conditions of beds and equipment at the hospitals have not improved. The UWP in opposition had their candidates visit the St. Jude hospital to expose the beds, bed sheets and other problems, yet there is still an urgent need   supply our hospitals with basic supplies.

Why has the Owen King EU hospital not been opened?

The Minister for Health has been absent; seem confused or missing at work in relation to the major health issues in Saint Lucia.

This is the same party now in government, which claimed that people were dying because on non-commissioning of dialysis machines at the Owen King EU Hospital.  Eighteen months after winning an election in 2016 the government is planning to provide dialysis services without the other medical services present at the hospital.

Was the government advised by professional medical personnel to operate dialysis machines without the other medical services of the hospital?

Who made that decision and what are the possible consequences if dialysis patients at the Owen King EU hospital were to develop complications?  Would you then rush them by ambulance to Victoria hospital? Is that consistent with best medical practice or driven by political expediency?

There is valuable and lifesaving equipment for the Owen King EU Hospital that was ordered for the treatment of Saint Lucians. However, Saint Lucians continue to travel to Martinique, Barbados and other countries while this government pays scant regard to the completion and commissioning of the hospital.

There are weekly reports of major inconveniences that continue at both the Victoria Hospital and the St. Jude Hospital; shortages of vital medication and basic supplies, equipment, faulty generators, electrical problems, or lack of response by Central Government .The people of Saint Lucia who access the hospitals can attest and can testify the stories, some of which are horror stories.

While our medical professionals and staff of the two major hospitals do their very best and do not report their frustrations publicly, they face enormous challenges that have intensified with this government’s neglect.

Fellow Saint Lucians, ladies and gentlemen, what we have in Saint Lucia today is a health system on crutches,  a system of hospitals and health centers that are not receiving the focus and priority of the UWP government. Every Saint Lucian must stop and focus on the eventual possibility that all of us will at some point, need to access our health services and we need to feel that our government is paying attention.

Much progress had been made between 2011 and 2016 to revamp the primary health care system with the refurbishing of many health centres, the St. Jude Hospital project was continuing and much progress had been made, a Commissioning Team was in place for the Owen King EU Hospital and preparations were being made to put Universal Health care back on track which our government started during the 1997 -2006 term in office.

We cannot be comfortable with the unavailability of medications and the acute shortage of pharmacists on this island. We cannot be happy with the lack of progress on our hospitals. We cannot be still while the UWP government reduces support to our children who are challenged and who receive specialist care .Will you accept that the government continues to disregard the pleas from Saint Lucians to recommence work on the St. Jude Hospital project with no specific explanation of what the future of St. Jude will be?

Diabetes is one unfortunate plague that continues to haunt the people of Saint Lucia. The Saint Lucia Labour Party had been in process of finalising plans for the construction of a Diabetes Research Centre. In its vindictive manner, the UWP has abandoned the project.

Again amidst all of these crises, the Minister for Health and Wellness seems absent unaware or confused. There is no discernible or focused political leadership in Saint Lucia’s Health System.

The government simply does not show that is cares about our health system and our most vulnerable people.

The Saint Lucia Labour Party continues to demand that the government of the United Workers Party:

All Saint Lucians will at some point need to face the health care system in Saint Lucia. We urge the Cabinet of Ministers to act urgently and stop the suffering of the people , in particular those who cannot afford to access private medical care or care overseas.