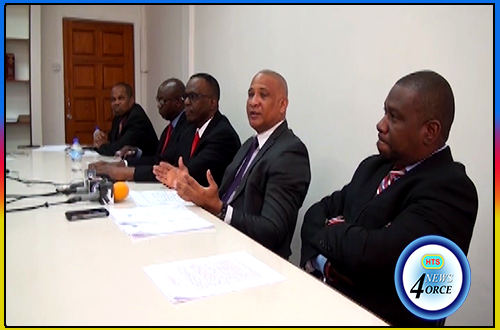 Members of the Opposition SLP

The Saint Lucia Labour Party (SLP) welcomes the announcement by the UK Home Secretary, Amber Rudd, that the Windrush generation and descendants will be granted British citizenship. It was further announced yesterday that the Home Office will waive citizenship fees for the Windrush generation and their families and any charges for returning to the UK for those who had retired to their countries of origin after making their lives in the UK. Most importantly, the UK Government agreed to scrap language and British knowledge tests when applying for UK citizenship and bring in speedy financial compensation for those who had suffered loss.

Meanwhile, the SLP has condemned Prime Minister Allen Chastanet for embarrassing Saint Lucia and other Caribbean nationals during his television interview with Channel Four in the UK. During the interview, Prime Minister Chastanet announced that he had no idea how many Saint Lucians were living in the UK, how many were affected by the Windrush discrimination and had not even known there was an issue affecting Saint Lucians and other Caribbean nationals until a couple of weeks ago.

The SLP believes that the Prime Minister should always ensure that he is properly briefed on what he speaks about so as to not embarrass Saint Lucia. Further, it raises questions on the work that High Commissioner Guy Mayers is doing in London. The SLP says it is aware that the Windrush generation issue has been an ongoing concern since the passage of the 2013 Immigration Act in the UK. There are presently many Saint Lucians and descendants of Saint Lucians who are affected.

The SLP was shocked that the Prime Minister described the situation as just an administrative cock-up and not the fault of the UK Home Office. The truth, according to the SLP, is that there was a deliberate policy to deport persons who were thought to arrive illegally in the UK and no exception was made for the Windrush generation. When cases begun to surface, nothing was done to correct the situation and the policy was actually intensified. The situation only became a national concern because of the extensive media coverage.

The SLP notes that Saint Lucians and other Caribbean nationals living in the UK are particularly hurt by the comments made by the Prime Minister.