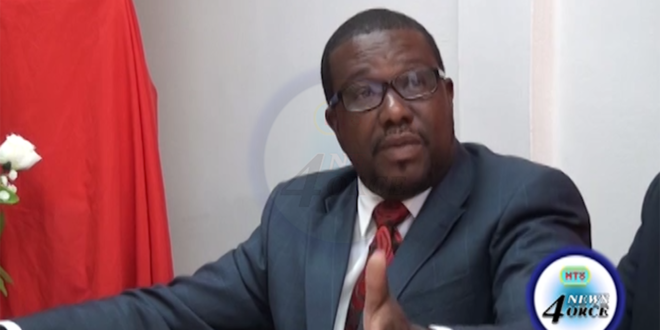 Good morning Ladies and Gentlemen of the Media.

I start by making reference to a government press release issued and voiced by Ms Nancy Charles, on Tuesday 24 April, where she stated categorically and I quote:

“The Government of Saint Lucia has NOT Signed any Agreement with Mr. Sean Matthew for the Redevelopment of Hewanorra International Airport! This is just another case of FAKE NEWS, LIES and Deceit of the St. Lucia Labour Party hoping to frustrate and delay the progress of the country”

The Press Release then went on to accuse the SLP of trying to tarnish Mr. Matthew’s reputation and followed with several paragraphs detailing Mr. Matthew’s biography. The question which immediately arose was why a government press release would fabricate such a lie about the Labour Party and then go to such lengths to promote the qualifications of an individual, if they were not contemplating an engagement with him. Or was that a case of “pwen duvant” (take in front)? In other words, take a pre-emptive strike on the opposition to disguise an actual action which was being contemplated?

The Labour Party immediately released a response to this blatant lie and challenged the Government and Nancy Charles to provide proof of any statement made by the Labour Party in respect of a contract to Sean Matthew.

The Labour Party reiterates, here, that as of April 24, 2018 it had made no statement in respect of an alleged contract issued to Sean Matthew or any entity associated with him.

We were aware, as would most St. Lucians, that reference was made by a local Talk-show host, on his program days earlier, to a recently registered company by the name of Executive Consulting and Management Services Ltd. (ECMS) of which Mr. Matthew was a director and that the company was allegedly the recipient of a contract to provide consultancy services in respect of the Hewanorra International Airport Redevelopment Project.

Since those statements were made, a number of documents have emerged in the public domain pointing to negotiations of a contract between the previously named ECMS and the Saint Lucia Air and Seaports Authority (SLASPA) in respect of the Hewanorra Airport Redevelopment Project. Further, the documents suggest that the contract sum, under consideration is in the region of US$1.35million to US$1.53 million or EC$3.66million to EC$4.15million in addition to expenses.

The Saint Lucia Labour Party has on several occasions stated its concerns about the current government’s departure from a Public Private Partnership (PPP) arrangement for the airport redevelopment, which would insulate the country from the huge debt estimated in the region of US$150 million ($407million), and at the same time avoid the negative impact that a loan of that magnitude would have on the country’s debt to GDP ratio. It is also important to restate here that the process was being managed by the IFC, a reputable World Bank agency. This was always intended to ensure that such a huge undertaking by the country would be conducted under the strictest transparent processes.

In his contribution to the recently completed budget debate, Leader of the Opposition, Hon Philip J. Pierre, revealed that the current government was also offered assistance with the financing and management of the Airport project, by the government of Canada. The offer from the Canadian Government required no government guarantee and also included construction of the North – South link road. This was also refused.

The question is why? If there is a good explanation the government has the responsibility to share it with the citizens of the country.

The Labour Party is convinced that the Government’s decisions in respect of this project and several others, is based strictly on the desire to be able to manipulate the procurement processes for the benefit of select persons.

Instead, Prime Minister, Allen Chastanet and his government have decided to secure a loan of US$150million to finance the airport project. This decision allows for a return to the manipulation of the procurement procedures which was associated with the UWP’s pursuit of that project during their previous term in office (2006-2011).

Prime Minister Allen Chastanet has on numerous occasions named Hon. Guy Joseph in an investigation associated with the handling of the project in the 2006-2011 period, which is now the subject of investigations by US law enforcement agencies.  However, among the other names appearing in documents associated with these investigations are Antonio Assenza, principal owner of Asphalt and Mining St. Lucia Ltd, and Allen Chastanet, then Minister of Tourism. Sean Matthew is also named in his capacity as the then General Manager of SLASPA.

From information made public from the ongoing investigations, St. Lucians should be very concerned that we are witnessing the reincarnation of a corrupt process. A project of that magnitude needs to be conducted in the most transparent way with all major contracts going through an open tendering process.

According to the document referred to by PM Allen Chastanet telephone and email records obtained in the process of the investigation revealed a clear contamination of the process to favour Antonio Assenza and A&M. The Prime Minister is placing himself in the unnecessary position to answer the question, why in the period leading to the submission of bids, 200 telephone calls were placed to persons directly associated with A&M, one of the pre-qualified bidders. There was no record showing that the other two pre-qualified bidders were provided with that same attention. The following is an extract from the investigation document:

In this same report referred to by PM Chastanet “Ministers Joseph, Chastanet and SLASPA CEO Matthews telephoned the shareholders of A&MSL, Assenza and Edgar on 130 occasions between November 1, 2008 and February 12, 2009 the date of the issuance of the HIA Request for Proposals by SLASPA.

The GOSL and SLASPA press releases omit to mention that after the Request for Proposals was issued the same three persons telephoned the same two shareholders between February 13, 2009 and April 5, 2009, the day prior to the receipt of the Bidders’ Proposals on 79 occasions. Details are presented in Appendix 2.

No calls were found to be made to either of the other two bidders, Ashtrom and IMTC who responded to the HIA Request for Proposals on April 6, 2009.”

It has also been revealed that SLASPA was forced by the then Stephenson King Administration to abandon the initial tendering process after it (SLASPA) had made a recommendation of a company which was not A&M. Following a decision to negotiate with bidders individually, A&M emerged as the preferred company. Despite all the collusion by local players, to help A&M, the company failed the due diligence undertaken by Deutsche Bank who had been the proposed source of finance – and the plot fell apart. But now, from all indications, it appears that the scheme is about to be resurrected. All the old players are beginning to line up. The question is: are we prepared to sit back and not demand the strictest transparency in the execution of this $400 million, costly, airport project? Are we going to allow the vultures to feast?

The report also indicates that A&M’s principal shareholder, Antonio Assenza, was very dismissive of SLASPA, and by all indications relied on his relationship with members of the King Cabinet to achieve privileged treatment. Who will be the anointed one this time?

The Saint Lucia Labour Party poses the following questions to the government in the hope that the public will be provided with much needed information on the arrangements currently being pursued for the redevelopment of the Hewanorra Airport.

The Labour Party believes that the public deserves to be reassured that the Hewanorra Airport Redevelopment Project, which will be one of the largest capital projects undertaken in this country, is to be conducted through a transparent and accountable process.