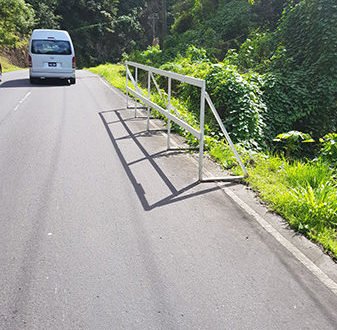 PRESS RELEASE: Castries, Saint Lucia, February 6, 2018 – The Department of Infrastructure, Ports and Energy wishes to inform the motoring public that there will be single lane traffic on the Trouvalle Road, Soufriere from 6th February -16th March 2018. This is to facilitate the construction of a retaining wall along this route.

The section of road collapsed during the 2013 Xmas Eve Trough. Project works will stabilize the road network whiles making traversing the area a lot safer.

As such all commuters are asked to be guided by road signs which will be placed for their information and guidance. Commuters are also encouraged to use alternate routes where necessary.

The Department of Infrastructure, Ports and Energy wishes to apologize for any inconveniences which may be caused as a result of the road works.