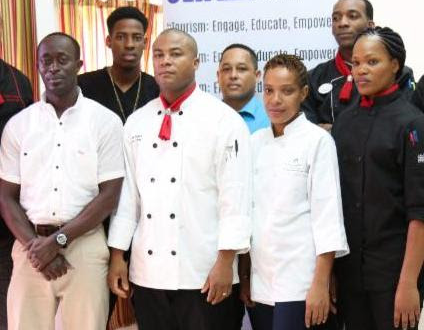 SLHTA gearing up for CHTA Taste of the Caribbean Culinary Competition

An eight-member National Culinary Team comprising of seven chefs and a bartender has already been selected, and the SLHTA is going full steam ahead with preparations for the competition which is scheduled to take place in Miami from June 22 – 26, 2018.

The Tourism Enhancement Fund is the main sponsor of St. Lucia’s National Culinary Team and all local events associated with the (CHTA) Taste of the Caribbean Culinary Competition.

The competition is open to hotel and restaurant chefs and bartenders who are members of the SLHTA.

As the big day draws near, there is growing anticipation within the hospitality sector for what is considered to be one of the most spectacular and sought-after culinary events in the Caribbean.

The SLHTA will be hosting a series of preparatory dinners, practice sessions, tastings and public culinary demonstrations that will be open to both invited guests and the general public. These sessions will allow for direct interaction with the National Culinary Team members, thus enabling them to receive critical feedback, while progressively honing their competitive skills.

Taste of the Caribbean is a hot-food competition where the competitors cook and present meals to be judged on presentation, taste and execution of skills.

“The SLHTA and the Tourism Enhancement Fund take great pride in supporting the (CHTA) Taste of the Caribbean Competition,” said SLHTA CEO, Roderick Cherry. “What delights us all the more is that the competition provides great educational opportunities and inspiration to the chefs who participate in the various workshops, dinners and demonstrations that we host to help them improve their skills and performance. Over the years we have prepared and sponsored several National Culinary Teams who went on to represent St. Lucia quite successfully in the competition, and put the island on the map in regional and international culinary circles. We look forward to another great performance from our national team this year,” he added.

Last year St. Lucia’s National Culinary Team won a silver medal in the Best Team Dinner category, along with a number of individual awards in the winners’ respective fields.