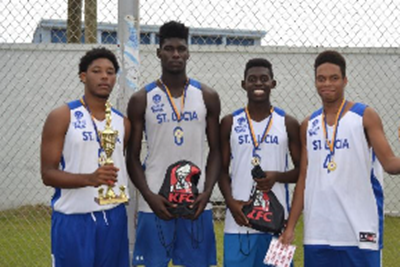 Unfortunately, games came to a stop due to torrential rainfalls and as such the qualifiers were concluded yesterday January 21st, 2018 with only 5 games to determine the male winners.

The International Lesser Antilles 3×3 tournament for girls & boys born 2000, 2001 & 2002 (U17) supported by FIBA’s foundation, the International Basketball Foundation (IBF) was slated for May 2018 in Sint Marteen but due to damages sustained during the recently concluded hurricane season; the country is unable to host; as such a new host country is still pending and upon confirmation will be announced. Having completed the National Qualifiers, the SLBF now has a male & female contingent to represent St. Lucia.

As part of the qualification criteria, the SLBF was required to hold a national qualifier under the rules and regulations of FIBA 3×3 Basketball.

The National Qualifier consisted of 12 teams (9 Males & 3 females) which was an improvement from the 2016 qualifiers. The SLBF hopes to see more teens and players involved in the 3×3 movement moving forward.

The SLBF would like to thank Dunstan Peters of 767Sportsclub for assisting in putting this event together. Also would like to thank Real Foods, Lucelec, Blue Waters & St. Lucia National Lotteries for their contributions & assistance which enabled the SLBF to successfully host another 3×3 National Qualifiers. Also thanks to the desk officials, referees, slbf loc and parents/ friends/ family who assisted and supported the SLBF and players during this event.