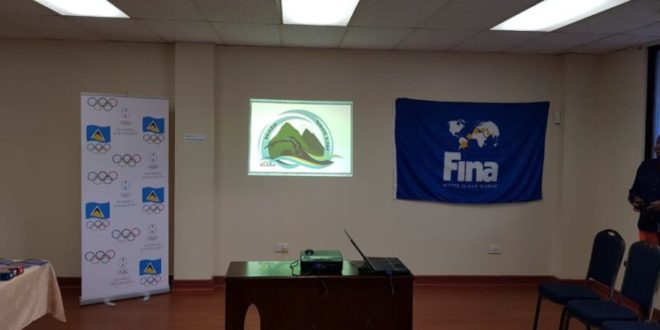 President Eddie Hazell gave a synopsis of the Association’s plan to bring Aquatics particularly swimming island-wide, in a safe and organized manner. Vice President Paula James articulated the Association’s intentions re school’s swimming and facilities, which was also echoed by President Hazell.

Aquatic Development Officer Yasmin Tyson presented a brief outline of SLASA’s Grassroots Programme and the possibilities that exist to make Aquatic Disciplines a viable option for all. She mentioned that forty one (41) instructors were trained in Level O (Orientation) and thirty one (31) in FINA Level 1 (Beginner). From those who participated in the FINA Level 1, Sixteen (16) had done the Level O in the first round of training.

Ms. Tyson looked at SLASA’s vision and mission for the National Development Plan which is “To create of an inclusive and competency based Aquatics Programme that is fun, safe and accessible to all St. Lucians” and mission statement is to “To give all persons the opportunity to learn to swim, and the ability to participate in all authorized Aquatic Programmes in a fun, safe and comfortable environment.”

The various levels of national swimmer certification were also presented using the Creole names of fishes and turtles which exist in our aquatic environment. This five year plan is well into its developmental stage and is being executed step by step with support from the international governing body FINA and local entities such as the St. Lucia Olympic Committee and the St. Lucia National Lotteries Authority.

The press brief concluded with the presentation of the intention of SLASA to host the first ever Inter Commercial Swimming Championships. This will not take on the standard rigid format of a swim meet but a fun and relaxing event to be enjoyed by all participants. Corporate St. Lucia and all business persons are urged to engage their employees in participating in this event, scheduled to start from September 30, preliminaries, then October 14, semifinals and November 4 finals. This will serve as an opportunity to market the sport in an effort to make it more inclusive.