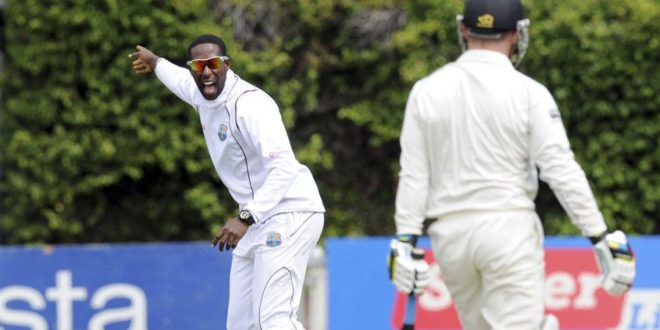 [ESPNcricinfo] A low-scoring contest between two teams at the farthest ends of the points table produced a thriller on the final day at Providence Stadium as table-leaders Guyana tied with Windward Islands, with Shane Shillingford trapping Anthony Bramble in front after scores had been levelled at 164. It was the first time in the 152-year history of the West Indies’ first-class championship that a match ended in a tie.

With six runs to defend, Shillingford sniped out the last three Guyana wickets in the space of seven balls across two overs, including that of No. 6 batsman Bramble, whose 54-ball 45 had injected momentum into the hosts’ chase after they had slumped to 88 for 4. Despite the last five batmen scoring only a combined ten runs, Bramble’s 20-run partnership with No. 9 batsman Veerasammy Permaul put Guyana in seven runs’ sight of victory before Shillingford struck thrice to complete his five-wicket haul. His efforts were well complemented by left-arm quick Delorn Johnson’s three-for, which also accounted for top-scorer Vishaul Singh (56).

Earlier, Shillingford had dented Guyana’s first innings with a four-wicket haul that had denied them a top-score beyond Shivnarine Chanderpaul’s 59. In doing so, Shillingford had partnered up with Sherman Lewis, whose 3 for 62 helped Windward Islands dismiss half the opposition line-up for single-digit scores.

Despite the dual offensive, Guyana were able to fetch a first-innings lead of 77, having skittled out the visitors for 117 after opting to bowl first. Permaul five for led the charge for Guyana, as only two of the Windward Island batsmen scored in excess of 17. Gudakesh Motie and Sherfane Rutherford claimed two wickets apiece.

Even though Windward fared reasonably better in their second dig, scoring 241 on the back of opener Devon Smith’s 95, dearth of support from other batsmen meant the line-up could last only 84.2 overs as all of the five Guyana bowlers used finished with two wickets each.