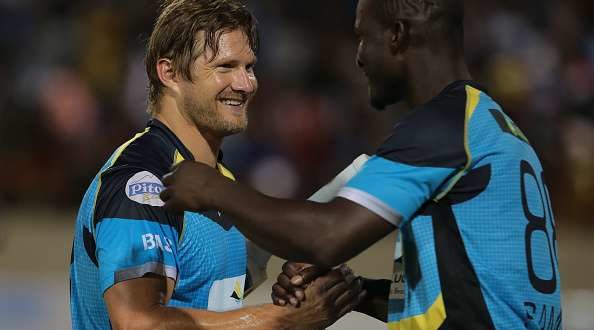 Shane Watson is fit to take the field when St. Lucia takes on the Barbados Trident in their third encounter in the 2017 Caribbean Premier League. The big hitting all-rounder was woefully missed in St. Lucia’s season opener and even more so in the second encounter in Port of Spain Trinidad. For many pundits, St. Lucia would have won in Trinidad had Watson, widely considered to be the best all-rounder in world had played.

Watson, suffered a calf injury which kept him off the field for the two games. In a pre-match press conference held earlier today, the Australian stated that for the first time was he “able to enjoy a full practice and feels ready to go in tomorrow night’s clash.” For Watson, St. Lucia’ struggles can be attributed to the team’s “inability to find the right combinations so far.” Watson believes that come Thursday, “the team will be more than ready to turn things around.”

At the conference, Star’s bowling coach Mervyn Dillon indicated that the team has had slow starts in the past. He suggested that though the team has not done very well with the bat, the team has the capability of turning things around quickly. For Dillon, he expects St. Lucians to still come out in their numbers to support the guys who will do their best come Thursday.

The St. Lucia Stars take on the Barbados Tridents on Thursday 10th August 2017, from 8:00pm. The match is schedule to bowl off at the scenic Daren Sammy Cricket Grounds.