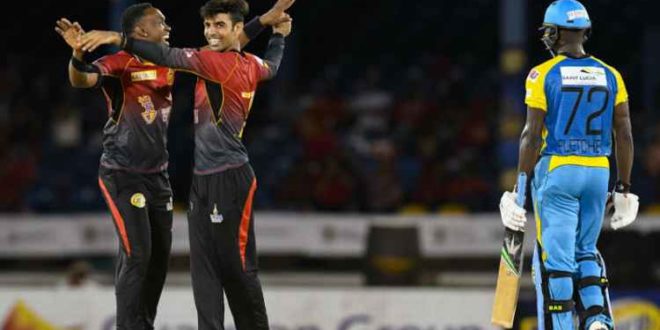 This game was a repeat of the tournament opener, just in terms of the result. Everything else about the contest was a hard scrap on a treacherous Port-of-Spain surface where spin dominated. Trinbago Knight Riders’ spin trio of Kharry Pierre, Shadab Khan and Sunil Narine picked 3 for 48 between them off 12 overs, restricting St Lucia Stars to 118 for 9. Shadab then had to shepherd a tense chase as Shane Shillingford ripped through the top order to leave Knight Riders tottering at 52 for 5. A 45-run stand for the seventh wicket between Shadab and Javon Searles, the highest in the match, took Knight Riders to their second win in as many matches.

Five Powerplay overs were bowled by the spinners. That this was a sluggish surface became evident at the outset when Pierre, the left-arm spinner, got the ball to turn and stop on the batsmen in the first over. Pierre, who was guilty of firing them in two nights ago, slowed his pace down nicely and struck in the second over when he had Johnson Charles lbw.

Kamran Akmal couldn’t cope either, often bordering on the thin line between being aggressive and careless, eventually falling to an ill-advised cut to an offcutter that kicked at him. Andre Fletcher and Marlon Samuels added 30 for the third wicket to lead a brief recovery, but at 75 for 3 in the 13th over, Knight Riders wrested control.

Andre Fletcher has a career strike rate of 106.66 in T20Is. Here, however, he had to bat through. Against pace, he was happy to hit through the line. Against the turning ball, he was a nervous wreck. He should’ve been out on 16, but for a huge slice of luck as the ball beat his slog sweep to hit the stumps only for the bails to briefly dislodge before slotting back into the groove.

Then, he was reprieved on 24 when Javon Searles palmed a catch over the long-on boundary. In between, however, he gritted his way through. His dismissal in the 16th over, attempting to hit out against Shadab, resulted in a wobble again. Having assessed the surface well, Kevon Cooper mixed up cross-seam deliveries with cutters to walk away with three wickets.

Briefly, it looked like Brendon McCullum had already caused enough damage in a low-scoring game, as he biffed three sixes in a nine-ball 19. But that was until Shillingford entered the fray and had him caught at midwicket. Four balls later, Colin Munro was out lbw playing the switch hit. Darren Bravo was out looking to cut one that skid through and Denesh Ramdin saw one dart through between bat and pad to crash into the stumps. When Dwayne Bravo was bowled by a searing yorker from Mitchell McClenaghan, Knight Riders were in trouble at 75 for 5 in the 10th over.

Having bowled four overs, Shadab was his best judge on how to approach a small chase. His confidence shone through as he made 30 not out to help convert a tricky chase into a cruise in the end. Shadab’s composure and game awareness – not one stroke was played in desperation – spoke of his maturity as he continued to enhance his reputation on the same shores where he first broke through at the international arena not too long ago.