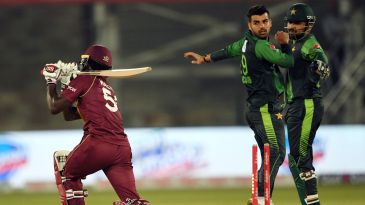 [ESPNcricinfo] Pakistan wristspinner Shadab Khan has been fined 20% of his match fee after being found guilty of verbal abuse during the second T20 international against West Indies in Karachi. Shadab’s offence amounted to a Level 1 breach of the ICC’s code of conduct, which also earned him one demerit point.

The incident occurred in the ninth over of the West Indies chase, when Shadab dismissed Chadwick Walton. After being taken for 11 runs in his first over by the batsman, Shadab returned to clean him up with a wrong’un off the first ball of his next over. Shadab then followed up by pointing his finger at the departing Walton, and made an inappropriate comment. Shadab, who is Walton’s teammate at Islamabad United, admitted his offence and accepted the sanction proposed by the match referee David Boon.

As per the ICC’s code, Level 1 breaches carry a minimum penalty of an official reprimand, and a maximum penalty of 50% of a player’s match fee, and one or two demerit points. This is the first time Shadab has been caught breaching the player code. If he accumulates three more demerit points within a 24-month period, it will translate into suspension points that will earn him a one-match ban.

Pakistan are presently hosting West Indies in Karachi, and have taken an unassailable 2-0 lead in the three-T20I series. The third and final game takes place on Tuesday.