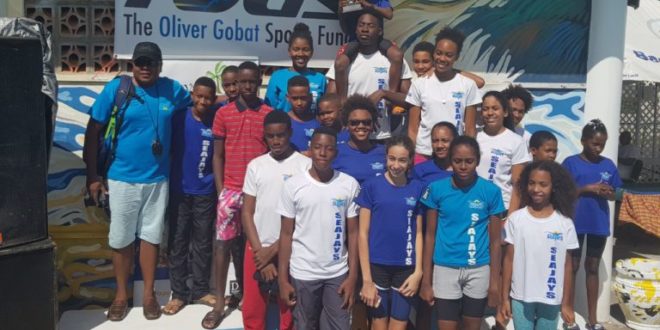 [Press Release] Seajays Swim Clubs is elated as it celebrates its successes over the past few months.

D’Andre Blanchard was the clubs’ sea lion contributing one silver and one bronze medal to the St. Lucia Carifta Swim Team.

Following the Carifta Swim Championship, the clubs gem swimmers to include James Sylvester, Mila Festini Cromer, Marisa Louisy, Tristan Dorville, Nathan Vigier, Keala George, Jayhan Odlum Smith and Omar Alexander to name a few, proved they were a forced to be reckoned with by winning total Club points of 818 points taking the club to 1st place at the RHAC Invitational Swim Meet this past weekend.

The Seajays Swim Club extends congratulations to Naima Hazell of the Lightning Swim Club on her contribution to the Carifta Swim Team and by extension to all swimmers of the various clubs who competed at the 2018 Carifta Swim Championship and the RHAC Invitational Meet.

The Seajays Swim Club looks forward to enhancing talents of its swimmers and contributing winners in the sport of swimming.