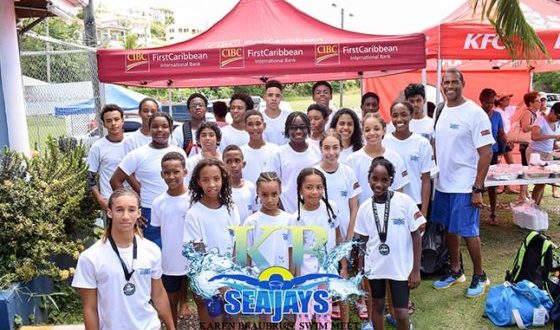 PRESS RELEASE:-The Seajays Swim Club welcomed its swimmers back to the pool on 4th September 2017. While the Club was happy to see its continuing members return to poolside it was also excited to enroll an impressive group of new swimmers.  The Executive along with its Coaches look forward to providing the swimmers with an engaging, inspiring and enjoyable swim program this year.

The Executive of the Club is pleased to announce the addition of a new assistant coach taking the complement of coaches to three (3); Brian Charles, Norm Banfield and John Mc Lennon.

President of Seajays Swim Club Mrs. Jackie Andrew wishes all swimmers a productive and successful school term and takes the opportunity to celebrate its members for their achievements both educational and in swimming over the last school year. “Congratulations are extended to our senior swimmers currently in Form 5 who wrote CXC Examinations in Form 4, who registered successes in Mathematics, English Language and Physical Education all attaining grades 1 and 2 respectively in the exams taken.” The Club singles out the efforts of Devin Boodha, Cavarri Taylor, Terrel Monplaisir, Jayhan Odlum Smith, Dristan Mauricette, Mya Peter, Sade Joseph, Nial Bergasse, Pavana Dalsou, Ian Shivnauth, Veronica Brown, Kayla George and Abigail Brown.

The Club also congratulates its swimmers who were successful at the Common Entrance Exams 2017 including D’Andre Blanchard, Jevonte´Mohammed and Rihanna Dalsou. The Executive wishes all their swimmers a seamless transition into their new schools and know that they will continue to shine in their academic pursuits.

The Club shares the thinking that “a sound  mind resides only in a sound body” and undertakes by the quality of its programs in and out of the pool to continue to nourish balance swimmers  and to encourage and nurture positive and well-rounded members.