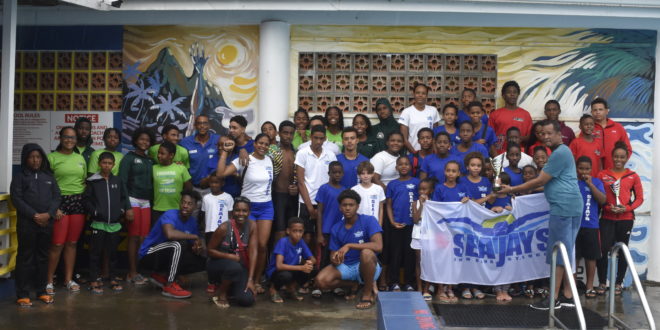 Of the 12 top rankings individual score positions, Seajays is proud to say we were able to have representatives  in the top 3 in each age group with the exception of 7-8 girls and 13-14 girls.

Every year 1 swimmer from each club is awarded the Karen Beaubrun award for upholding the values, standards and dedication to the sport of swimming and club. This year Omar Alexander was awarded this most prestigious award for his upholding the values that coach Karen herself lived by.   Congratulations to the nominees from the other clubs as well, including Hannah Christopher – RR Aquatics; Gelanie Augier – Lightning Aquatics; Allandre Cross – Sharks Swim Club; and Rashawn Francis – Southern Flying Fish.

SeaJays Legends Swim Club would like to thank Dr. Diane Worrell and the Rodney Heights Aquatic Centre for their dedication to this meet and to swimming on a whole.

An extra special thanks you to Dr. Beaubrun and family for their continued support of Seajays Legends Swim Club.

The Karen Beaubrun Swim meet was organized and hosted by the SeaJays Legends Swim Club to honor coach Karen for her commitment to swimming and as a founding member of the club. Not only was she our coach she taught values such as fair play, respect, dedication to team and sport, honesty and leadership, values of which are still be taught to our swimmers to this day.