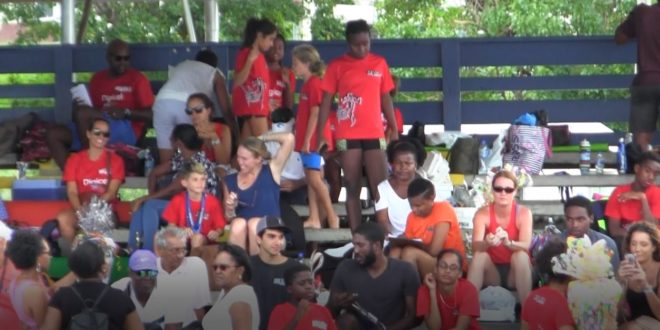 This past weekend October 6th and 7th the Sea Jays Swim Club hosted the Tropical Rhythms Short Course National Swimming Championships at the Rodney Heights Aquatic Centre.  The annual event has been used year after year as the final qualifier for the OECS National Swim Team, with this years Championship being hosted in Antigua November 8th – 11th.

The event kicked off on Saturday with an opening ceremony which included a few remarks from Sylvia Auberto, Brand Manager of Grace and Eddie Hazell, President of St Lucia Amateur Swimming Association. Pleased to have Grace Tropical Rhythms come on as the title sponsor, President of the Sea Jays Swim Club Heidi Emmanuel-Peter expressed her hope of a long and fruitful partnership with the brand, especially at a time when seeking sponsorships has proven to be difficult. She also expressed her gratitude for support received from Ecowares, The Harbor Club, Lucelec, SSDF, Boslil Bank, Subway and The Media.

This year included the return of several seasoned swimmers such as Evelyn Day, Runako Daniel, Julien Brice and Joshua Adjodha.  Overall, the swimmers pushed for top performance in all events.  Personal bests were achieved in 68% of splashes from swimmers in all clubs.  Ecstatic to see younger age groups breaking records, Sea Jays notes that their own  D’Andre Blanchard broke the 11-12 boys records in 50M Free, 50M Fly, and 50M Breast. Other records were also achieved by 8 and Under Girls Fayth Jeffrey of Southern Flying Fish and 9 to 10 boys Karic Charles of Lightning Aquatics and Antoine Destang of Sharks Swim Club.