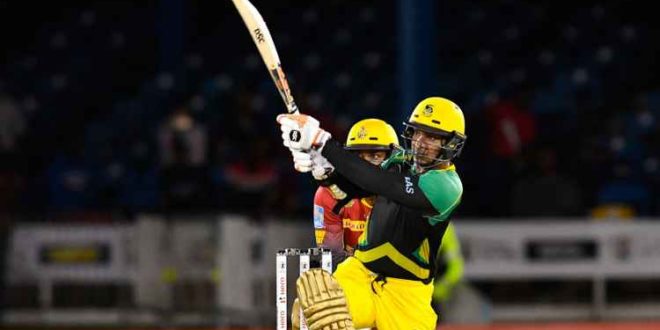 Kumar Sangakkara led the Jamaica Tallawahs to a winning start to their home leg of CPL 2017, striking a season-high 74 not out in a six-wicket win over the winless St Lucia Stars at Sabina Park. In a batting showdown of the captains, Sangakkara’s tally overpowered Shane Watson‘s 80 in the Stars’ total of 172 for 8. The Tallawahs need one more win to clinch a fifth consecutive playoffs berth.

Fresh looking visitors
Watson announced a slew of changes, dropping three overseas players – Jesse Ryder, Eddie Leie and Mitchell McClenaghan – in favor of locals. The tweaks weren’t just restricted to the XI, but the batting order too. Johnson Charles was dropped down the order, with Rahkeem Cornwall opening with Andre Fletcher. The move didn’t have the desired impact as Cornwall chipped a catch to Krishmar Santokie at long-on for 7 in the third over.

Willful Watson
One match after being run-out first-ball, Watson hammered seven sixes, propelling Stars to within a run of their season-best total before falling for a 45-ball 80 with eight balls remaining. He was fortunate to be reprieved on 22, in the 11th over, when Santokie spilled a waist-high chance at short fine leg after Kesrick Williams had tucked him up. Two balls later, Williams tried to bounce Watson, but the baill sailed over the leg side fence. Watson grew in confidence from there on, bringing up his half-century off 30 deliveries.

Watson reserved the most punishment, literally and figuratively, for Mohammad Sami. He struck two consecutive sixes off the Pakistani seamer in the 17th, then drilled him in the midsection off the following delivery. Watson creamed his seventh and final six off Sami in the 19th before he fell to a slower ball dragged wider of the crease one ball later.

Sensational Sanga
Coming out to bat in the third over of the chase, after Lendl Simmons fell, Sangakkara started with a boundary over point off Jerome Taylor. He played second-fiddle to Glenn Phillips initially as the New Zealander clattered a pair of sixes off Marlon Samuels and Shane Shillingford in the Powerplay during the course of a 42-run stand in just 4.3 overs. After Phillips fell, Sangakkara picked up the pace further with Andre McCarthy, who continued to impress, this time making 36 in a 71-run stand.

Sloppy Stars
For as good as Sangakkara was, the Stars routinely released pressure, ensuring the asking rate was always in check. Twice inside the first 10 overs, Stars bowlers bowled five wides down the leg side; the hosts reached the halfway mark at 84 for 2. Like Watson, Sangakkara too was reprieved when Shane Shillingford fluffed an opportunity at short third man off Kyle Mayers in the 14th over. He was on 32 then.

Both Sangakkara and McCarthy were dropped again in the space of three balls, off much tougher diving efforts, between 14th and 15th overs before Taylor overstepped later in the over. Sangakkara scooped the free hit for a four that ricocheted off the stumps to the fine leg rope to end the over.

By the time McCarthy fell at the start of the 17th, the required run rate was a shade over eight. Sangakkara soon raised his fifty with a clip off Watson. Obed McCoy was hit to the boundary twice in the following over to bring the equation under a run a ball before Sangakkara sealed victory in the 19th over.