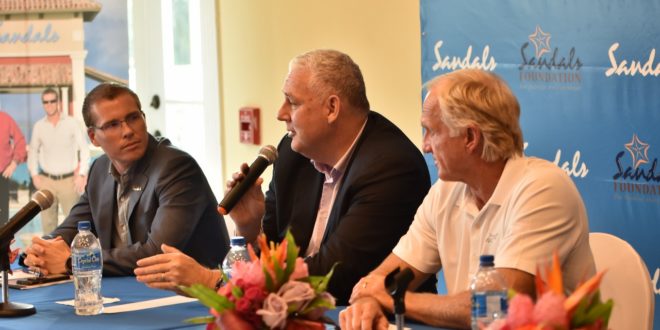 Castries, Saint Lucia – March 01, 2018 – Less than a year after Sandals Resorts brought the world-famous over-the-water bungalows to Saint Lucia, the leading resort chain is about to open a whole new market for the island’s tourism sector.

Keeping a promise made by Chairman the Hon. Gordon ‘Butch’ Chairman after the company acquired the 18-hole Cap Estate Golf Course in 2017, this week World Golf Hall of Famer Greg Norman visited Saint Lucia to begin plans to convert the facility into an international standard Championship Golf Course.

Mr. Norman, who won over 90 tournaments and spent more than six years in the number one position during his career, also holds the record of being voted into the Hall of Fame with a higher percentage than any other golfer in history.

His company, the Greg Norman Company, is recognised as the leading designer of golf courses in the world, and wherever he stamps his name, the global golf fraternity is sure to follow.

Following a tour of the Sandals Golf and Country Club on Tuesday February 27th, the Chairman and CEO of the Greg Norman Company was delighted with the potential he saw for Saint Lucia. He made the comments at a press conference immediately following his tour.

“What I’m very proud about is that what you have out here is a diamond in the rough, and I mean that with all sincerity.”

Mr. Norman has previously worked with Sandals Resorts to design the golf course at Emerald Bay in Exuma, Bahamas, and he shared the benefits that it brought to that island, benefits which it can also bring to Saint Lucia.

“They had a Web.com tournament there, and what did the Web.com tournament do, the PGA Tour did? It gave them massive exposure, and I was with a couple of PGA players recently who played that golf course and were totally over the moon about it, and they said we want to go back there, not just to play golf, but we want to go back there to experience what Sandals did in Emerald Bay. It’ll be no different here.”

Sandals Deputy Chairman and Chief Executive Officer Adam Stewart said that the new championship golf course could be finished as soon as the next 12 to 14 months.

Going beyond the enhanced golfing facilities, Sandals also plans to break ground on a fourth resort in Saint Lucia in 2018, Sandals La Source Saint Lucia, and the CEO confirmed that all was on track.

“I must say that this (is a) 380-room masterpiece, we have never worked more assiduously and more focused on building the best resort that our hotel chain in 36 years has ever built. It’ll be all-suite. It will have butler-suites that will rival any room in any resort anywhere on planet earth. It’ll employ 900 more Saint Lucians permanently, and it will employ 1,200 Saint Lucians during the construction phase, it will complement everything we’ve done here, and of course we are going to put a lot of golfers in it and promote it as a golf destination. It will raise our annual economic footprint in Saint Lucia to over US$105 million of economic contribution.”

It was welcome news for Saint Lucian Prime Minister Allen Chastanet, who attended the press conference along with Minister with Responsibility for Tourism Dominic Fedee. Both men agreed that these were phenomenal developments for the future of tourism, especially since it comes on the heels of the island enjoying record growth in the sector for 2017.

According to Prime Minister Chastanet, “I think that Saint Lucia’s best days are still ahead of it, and I think that there are some incredible things that are going to be taking place in Saint Lucia. We have to know that the world is moving at a very fast pace, and we have to remain competitive. We’ve got to strive to be number one; we’ve got to strive to be the best.”

The Prime Minister also commended Sandals for what is has done, and continues to do to develop the economy of Saint Lucia, “Look at what they have done for our country. How many people have been trained, How many thousands of people have been given the opportunity for proper livelihoods. In my wildest imaginations, and I think that Sir John (Compton) and even the Labour Party would attest to the fact that Sandals has more than delivered in terms of the promises they’ve made to the people of this country.”