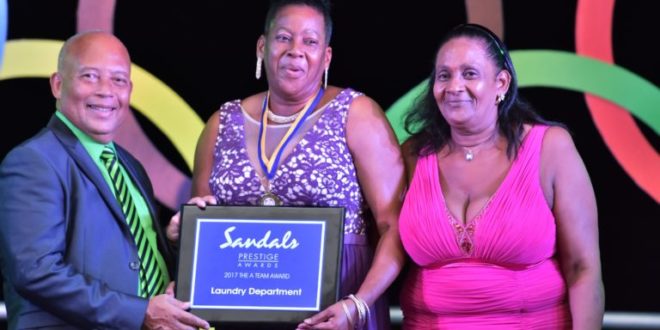 It seems like only yesterday that team members were being wined and dined for their hard work and attention to detail at the resorts, but that was in 2016. Another year has rolled along and Team Members have just successfully completed the 2017 team member awards.

From an Olympic-Champion themed event at Sandals Regency La Toc Golf Resort and Spa, to the Wakanda experience at Sandals Halcyon Beach Resort and the Grande Wave of Excellence at Sandals Grande St. Lucian Spa and Beach Resort, it was a week filled with anticipation as team members planned and executed shows that put their creativity on the front lines as rooms became transformed into pure works of art.

No sooner had one show ended, than another one began with the flair and pizazz that the team members have come to know and expect, as they came out in large numbers to support the nominees who would ultimately represent the best of the best at the 2017 Prestige Team Member Awards.

The three team members who each copped the top award of Diamond Team Member 2017 exemplify qualities that are worthy of emulation. Of Sandals Regency La Toc’s – Dwight Goodman, his team members say he is “Outgoing; very motivated, and can give positive solutions to problems. He is extremely genuine and calm and very engaging. He is a people’s person who puts pride into work.”

Sandals Halcyon Beach’s Khadijah Preville is described as “Quite the mentor to her peers, and well respected throughout the resort, an honour that has gained her the most prestigious award, Diamond Team Member 2017.

Although she may be seen as a novice in the industry, her tenacity and discipline has sent her to the top of the class.”

From Sandals Grande St. Lucian Spa and Beach Resort, Marvin Alfred earned himself the top award – Diamond Team Member 2017. Described as “A fun-filled dynamic person who is very passionate about his work, he really loves what he does and he always comes with a level of enthusiasm that brings out the best in him.”