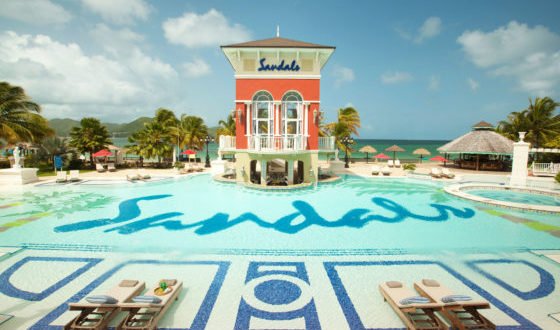 Hundreds of holidaymakers – including many devastated wedding parties – have been left high and dry after one of the biggest all-inclusive resorts in the Caribbean announced an unexpected shutdown.

The Sandals resort in Antigua has left brides in tears following its sudden decision to close for three months from September 20.

Tourists have been forced to cancel their holidays, having spent thousands of pounds to book their trips. Among them are British couple Mark Ingham and Sharon Osborne, both 55, who had planned to wed among the palm trees of the Sandals Grande Antigua resort on September 21. But last week they were told their wedding was off.

Mr Ingham said last night: ‘My fiancée hasn’t stopped crying since we found out. We’re absolutely crushed and just have no idea what to do. This was meant to be our big day which we had been planning for months and months and Sandals has ruined it. We’re out of pocket to the tune of thousands of pounds. It had been our dream to get married in Antigua and now it’s in tatters.’

The couple, from Basingstoke, were told by their travel company Blue Bay that they would have to reschedule after December 17, the date when the resort reopens.

They had already forked out £3,900 for the wedding and holiday, £545 for a photographer and another £315 on other wedding treats. The couple have had to phone dozens of guests who had booked expensive flights from as far as Los Angeles and tell them to cancel, and may have to axe a reception for 150 guests that they planned on their return to Britain.

Blue Bay told Mr Ingham that at least four other couples have had to cancel or postpone weddings in the five-star resort.

It is the first time the couples-only Sandals Grande Antigua – which has 273 rooms, 11 restaurants and 27 acres of gardens – has closed in 25 years.

The company insists the closure is for important refurbishment work but Antiguan Prime Minister Gaston Browne branded it ‘an act of hostility’ and accused the company of using the shutdown – which will affect more than 700 local workers – as a strategy to win concessions such as tax breaks from the government. ‘It is clearly an act of sabotage and I am saying that no investor should be able to treat our people in that way,’ he said.

Sandals Resorts International chairman Gordon ‘Butch’ Stewart said in a statement: ‘We recognise the dramatic consequences this action has.’

But he told those affected: ‘We humbly and sincerely apologise and promise Sandals will take care of you… in the most professional and practical way possible.’

Two days ago, Sandals Resorts chief executive Adam Stewart, Gordon’s son, tweeted a selfie with the caption: ‘When you have the BEST Weddings team & it’s Friday…’