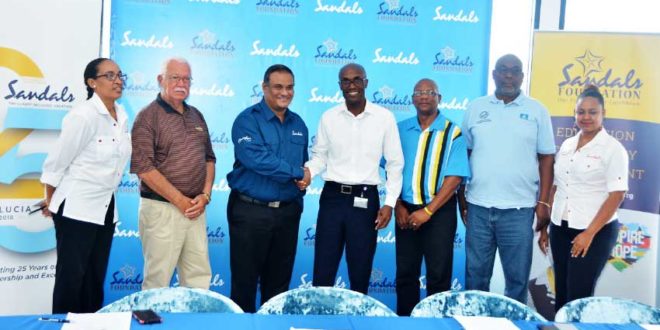 Press Release- Sandals has announced a three-year sponsorship of the Saint Lucia Under-19 Inter-District Cricket competition worth over XCD$30,000 a year.

The official announcement came during a press conference at the Sandals Halcyon Beach Resort in Saint Lucia, hosted by the company and officials of the Saint Lucia National Cricket Association.

The tournament, which will now be known as the ‘Sandals Under-19 Cricket Cup’ gets underway in early March, and will feature 14 teams from throughout Saint Lucia, competing for trophies and cash incentives.

In making the announcement, Sandals Regional Public Relations Manager Sunil Ramdeen explained that sponsoring this tournament is a natural follow-on from the Sandals Cricket Academy, which was launched in 2002.

“Apart from reaching more players, the goal is to uplift the way the tournament itself is conducted and to bring greater public and media attention to it. This will create more opportunities for young cricketers that would to set them on a development path, leading to greater exposure and selection to not just national, but regional sides like the Windwards or the West Indies. We have committed to this tournament for three years, and once all goes well, we will extend even further. This sponsorship is a reflection of our belief in Saint Lucia’s young players, and follows a similar development last year, when we sponsored the Under-19 tournament in Jamaica.”

President of the Cricket Association Julian Charles noted that the timing of the sponsorship was crucial, as the SLNCA seeks to take national cricket to another level.

“‘Our young players all have the capacity, all have the potential to play for the West Indies, and we see this sponsorship giving them a helping hand so that they can go all the way. We are going to ensure a well-run event, and we are going to deliver on this championship. So once again we say thank you to Sandals. This sends a message to other corporate Saint Lucians that they need to get on board, it’s not just the job of the Saint Lucia National Cricket Association and the job of government, but you the corporate bodies need to get on board, and Sandals is flying the flag high as far as cricket is concerned.”

“With Sandals coming on board what it has done, is that it has given the added motivation needed for the young players in the various communities who will be hoping to showcase their talent, and in showcasing their talent, we are hoping to produce a few more Darren Sammys, Johnson Charles’ and also of late we have Kimani Melius. We are positive and I am confident that we are going to put on the sort of show that would encourage the cricket loving public to come out.”