Home / Sports / Sammy’s Zalmi go down to Sultans in PSL 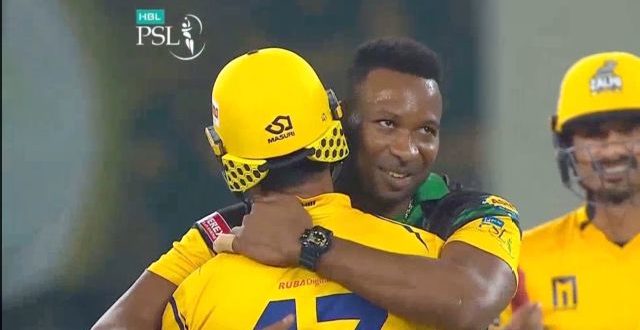 Sammy’s Zalmi go down to Sultans in PSL

A remarkable assault from Sohaib Maqsood blasted Multan Sultans to their second victory in as many matches over defending champions Peshawar Zalmi. Maqsood’s unbeaten 85 off 42 – which included seven sixes – is now the highest individual score in PSL 2018, and saw Multan post 183 – the highest team total this year. It was enough to see off Peshawar, who for their part batted well, but were unable to keep up with the intimidating asking-rate throughout the match, ultimately falling short by 19 runs.

Multan had begun well, but were never scoring at a run-rate that suggested anything like their final total was ever a prospect. Kumar Sangakkara (28) and Ahmed Shehzad (37) were effective and efficient, but it wasn’t until Maqsood arrived that the runs began to flow properly. The last eight overs saw 107 runs scored as a number of Peshawar’s bowlers lost their discipline, most notably Sameen Gul and Wahab Riaz, as Multan amassed 183.

Peshawar lost early wickets, with Kamran Akmal, Andre Fletcher and Dwayne Smith all failing to capitalise on aggressive starts. Mohammad Hafeez (56), who scored a half-century and Liam Dawson (32), put on a counter-attacking partnership, but the asking rate was always just a bit too far ahead, and Peshawar were made to pay the price for their errant death-overs bowling.

Where the match was won

It had begun as quite a contained bowling performance from Peshawar, but the last eight overs saw them go from bad to worse, culminating in something borderline amateur. Any considered plans were quickly shelved as Maqsood’s truculence scrambled Peshawar’s minds, with the defending champions perhaps missing the calming influence of their injured captain Darren Sammy on the field. The last four overs alone went for 60, 42 of them coming in sixes as Maqsood found himself in a purple patch. He was helped by some bowling that wouldn’t have pleased Peshawar’s bowling coaches, and the return of Riaz’s famous no-ball problem. It all added up in the end.

The men that won it

Maqsood aside, of course, it would be harsh on Sohail Tanvir not to get a mention. He had a couple of poor seasons in the PSL, but is having an excellent tournament so far. Today’s performance might just have been the pick of the lot. Opening the bowling for Multan, he put on early pressure by befuddling the batsmen with his uncanny variations, not only stymying the runs but also taking Fletcher, Liam Dawson and Hammad Azam. His final figures of 4-0-14-3 did complete justice to a player who has shone in franchise cricket all around the world, and is finally coming into his own in the tournament that will likely matter to him more than any other.

Multan might walk away with all the run-scoring records, with Maqsood’s 85 and the highest team total, but if you were to walk away with one individual memory from this high-scoring contest, it would be one ball from Mohammad Irfan to Fletcher. Playing his first game in the PSL this year, Fletcher faced the giant Irfan with his front leg already half cleared. As Irfan pitched it on a length, it was in the slot for the West Indian, who got what was left of the front leg out of the way, and swung towards cow corner. It was the cleanest contact you could hope for, the ball flew away at pace, and soared into the third tier of the stands. It smashed the record for the biggest six of the tournament, registering at a seemingly insurmountable 114m, making Joe Denly’s 104m hit a few days ago appearing rather pocket-sized.

Multan go to the top of the table with nine points from six games, while Peshawar, now with three wins and three losses each, stay at third.