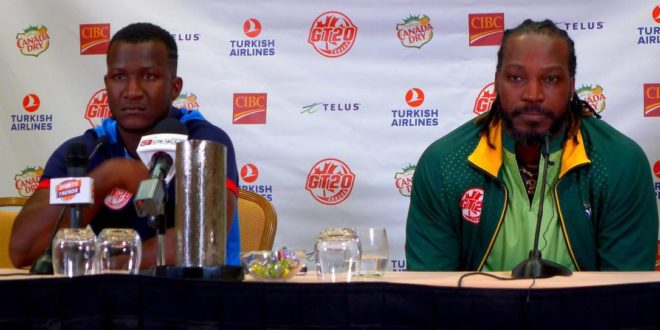 TORONTO, Canada (CMC)- Despite half-centuries from Evin Lewis and Andre Russell, the Chris Gayle-led Vancouver Knights still went under to Darren Sammy’s Toronto Nationals when the Global T20 Canada got underway on Thursday.

Lewis hit a swashbuckling 96 from 55 balls and Russell smashed 54 from 20 balls to propel Vancouver to 227 for four from their 20 overs.

However, led by Anton Devcich’s unbeaten 92 off just 44 balls and Steven Smith’s knock of 61 the Nationals reached 231 for the loss of four wickets, with four balls to spare.

Lewis and Russell came together following the early dismissals of Gayle (17) and Chadwick Walton, who scored just eight.

The two added 75 runs in 28 balls in a fourth-wicket partnership to help carry the Knights over the 200 mark.

Nikhil Dutta was the pick of the bowlers for the Nationals, finishing with 2-26 from his four overs.

Chasing a mammoth total, Leon Johnson gave the Nationals a good start at the top of the order, scoring 30 from just 12 balls.

Following his dismissal at 60-2, Smith and Devcich took over in a 91-run partnership where they scored at over 10 runs an over.

Even after Smith and Kieron Pollard (4) lost their wickets, Sammy stroked an unbeaten 22 to help guide his team to victory.