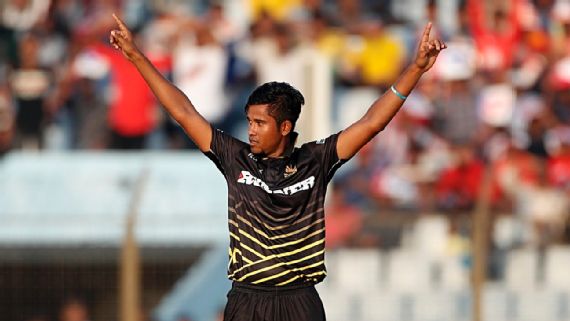 Rajshahi Kings kept their qualification hopes alive with a crushing win over Chittagong Vikings at the Zahur Ahmed Chowdhury Stadium. While Rajshahi rose to fifth position with the win, Chittagong’s defeat knocked them out of the 2017-18 BPL.

Qazi Onik enjoyed a stunning debut, taking four wickets as Rajshahi defended 157 for 6 after electing to bat first. Chittagong were bowled out for 124 in 19.2, becoming the first team to exit the tournament.

Onik, the left-arm pacer, took the key wickets of Anamul Haque and Stiaan van Zyl, before adding Sunzamul Islam and Tanbir Hayder to complete impressive figures of 4 for 17 in 3.2 overs.

When Rajshahi batted, they recovered from 86 for 4 with the help of Darren Sammy, who top-scored with 40 off 25 balls, muscling two fours and three sixes.

Mominul Haque fell in the second over of the match, slicing Taskin Ahmed for a catch at third-man. Zakir Hasan and Luke Wright then went on a boundary-barrage, which included four fours in six balls, until Luis Reece took out Zakir for 17.

Mushfiqur Rahim got cracking with a four off his first ball but Rajshahi were again hit when Wright was caught sharply at deep midwicket by Sikandar Raza, who kept himself inside the field as he moved back to take an overhead catch. All the while, Mushfiqur was in fine form, striking Sunzamul Islam for a six and two fours in the 11th over.

Nayeem Hasan, one of four BPL debutants this match, then outsmarted Mushfiqur, bowling slower through the air and getting him to hole out to long-on. Mushfiqur made 31 off 22 balls and Rajshahi were reduced to 86 for 4 in the 12th over.

Sammy turns the heat on Chittagong

Sammy was at his imperious best in the slog overs. He struck three sixes – two of them off Reece and one against Taskin – in the last five overs. He added 69 runs for the fifth wicket with James Franklin, who made for a study in contrast with his run-a-ball 30. Rayad Emrit, Taskin and Reece bowled very well in the slog overs, never letting Rajshahi to get away with anything significant. Still, with the help of Sammy’s timely boundaries, Rajshahi punched 56 runs in the last six overs: a recovery that proved more than good enough in the end.

Rajshahi and Chittagong went back and forth in the early exchanges during the chase. In a frantic first over, when Mushfiqur Rahim injured a finger, Mohammad Sami weeded out the big-hitting Luke Ronchi, who swiped across a length ball and offered a catch to Mehidy Hasan at the deep square-leg boundary.

Anamul and Soumya Sarkar then led a quick turnaround with a 38-run second wicket stand off 28 balls. By the end of the fifth over, Chittagong had raised their fifty and were well on course to chasing the total down.

Mustafizur Rahman then found a way past the partnership in the last over of the Powerplay, when he duped Soumya with a slower ball that was skewed to mid-off. Anamul followed Soumya into the dugout two overs later, top-edging a pull to the keeper and giving Onik his maiden BPL wicket.

Sikandar Raza and van Zyl kept the score ticking, but their partnership of 32 took 30 deliveries and the required rate climbed. The Pakistan legspinner Mir removed Raza, who swung at a full toss and was very well-caught at deep square-leg by the substitute Naeem Islam jnr.

Luis Reece fell to his own undoing, attempting an improbable second run and being caught short of his crease. Naeem was back in the mix in the next over, when he reached over his head to catch van Zyl’s pull at the deep midwicket boundary and flicked the ball over to Mir as the momentum carried him over the ropes.

Another moment of brilliance on the field, this time from Mehidy, who took a brilliant catch running to his left from long-on, sent back Rayad Emrit in the 17th over. With that, Chittagong had lost four wickets for 24 runs.

Rajshahi did not let their intensity drop despite having pulled themselves ahead. They were sharp on the field right until the end, when wicketkeeper Zakir Hasan’s direct hit effected a run out of Taskin and sealed the game. Chittagong lost their last seven wicket wickets in 6.4 overs, for the addition of just 32 runs.