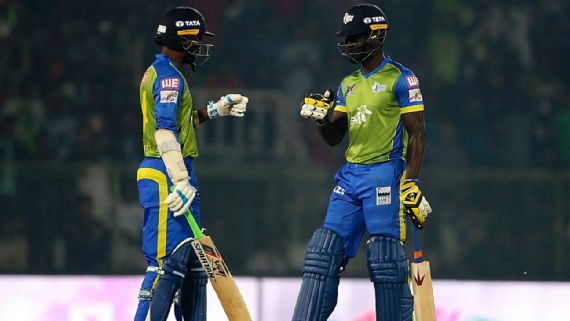 Khulna’s 213 for 5 – the season’s highest score – was built around contributions from Nazmul Hossain Shanto, Afif Hossain, Nicholas Pooran and Carlos Brathwaite, who ensured their run-rate never went down. Afif and Pooran got fifties as they very nearly toppled the BPL’s all-time highest team score, which is still held by Dhaka Gladiators’ 217 for 4 since 2013.

Zakir Hasan gave Rajshahi a good start with his direct hit that got rid of Rilee Rossouw in the fourth over but soon afterwards, Shanto hit couple of sixes off Mehidy Hasan Miraz, both high over long-off. Shanto and Afif added 45 for the second wicket, during which the latter struck two sixes off Kesrick Williams and Mustafizur Rahman.

The wickets of Shanto and Mahmudullah came in quick succession but Afif and Pooran transitioned very well, adding 88 runs for the fourth wicket.

Pooran hammered James Franklin for two successive sixes over long off in the 14th over before adding a third in the 16th, also off Franklin, over long-on. Pooran ended up as Franklin’s third wicket, but it was after he made 57 off 26 balls with six fours and three sixes. This was his first fifty in the BPL, in his 14th game.

While Shanto and Pooran had been attacking, Afif remained the backbone. He picked up singles quite easily and also got three more sixes, the last of which brought up his maiden BPL fifty.

Afif also fed the strike to Carlos Brathwaite, who hammered three sixes and as many fours in his 14-ball 34, but couldn’t quite add any more sixes in the last over in which Mohammad Sami conceded just five runs.

Mominul Haque got a four off the first ball but he didn’t last too long, getting bowled by Shafiul Islam in the third over. Luke Wright was Shafiul’s second wicket later in the over, when his hit towards long-on was intercepted by Jofra Archer, who stretched fully to complete the catch.

Rony Talukdar and Zakir Hasan raised their game in their 55-run third wicket stand. Rony struck five fours and a six in his 36 off 23 balls. His only six came when he pulled Jayed over midwicket. Zakir also got into the groove by hitting Shafiul for three successive fours in the seventh over – twice through point and once past mid-off.

But Jayed struck back, removing Rony and Zakir off consecutive deliveries in the ninth over, both caught in the deep. Zakir had made 19 off 12 balls.

Brought back into the attack in the 11th over, Shafiul cramped Darren Sammy for room as he tried to swing him to the leg-side. Mahmudullah took the simple catch at mid-on before Mushfiqur Rahim fell next ball, cleaned up by a full ball. At 81 for 6, Rajshahi were running out of time.

Mehidy and Franklin added 40 runs in 4.2 overs for the seventh wicket but the required run-rate went over and beyond as Khulna ambled towards a comfortable win. Shafiul took the last wicket to fall, finishing with 5 for 26 from his four overs.