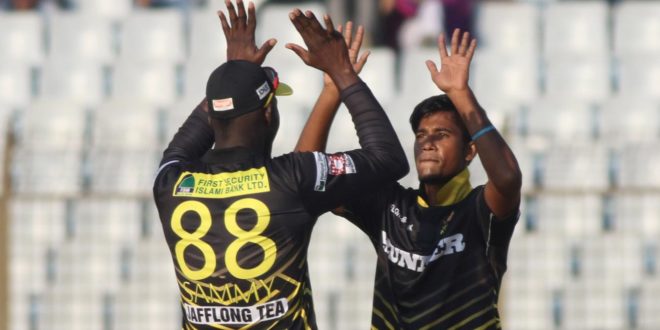 Sammy, Onik star as Kings knock Vikings out of BPL 2017

Darren Sammy led from the front with a 25-ball 40 while Qazi Onik bagged a four-fer on his T20 debut to secure Rajshahi Kings a 33-run win over Chittagong Vikings in the Bangladesh Premier League 2017 encounter on Wednesday (November 29). Vikings could muster just 124 in a chase of 158.
Anamul Haque (23) and Stiaan van Zyl (27) made decent contributions but the duo couldn’t convert starts into big scores. However, when van Zyl and Sikandar Raza, batting at No. 5, were at the crease, the Vikings camp would have hoped to chase down the target. At that crucial stage of the match, Usama Mir struck by removing Raza to reduce Vikings to 92 or 4 in the 13th over.
Onik followed it up by removing van Zyl while Luis Reece was run out as Vikings slid to 105 for 6. Onik and Mustafizur Rahman then gave the finishing touches to Kings’ fine show as Vikings were cleaned up in the final over. Onik ended up with impressive figures of 4 for 17.
Earlier, Kings won the toss and opted to bat. Luke Wright (25), James Franklin (30) and Mushfiqur Rahim (31) all made useful contributions. However, it was Sammy who upped the tempo in the slog overs by slamming two fours and three sixes. Reece, the batting all-rounder, picked up three wickets for 33 runs.
With four wins in 10 matches, Kings have kept their hopes of qualifying for the playoffs alive. On the other hand, with just two wins from 10 matches, Vikings have been knocked out of this year’s BPL.
Brief scores: Rajshahi Kings 157/6 in 20 overs (Darren Sammy 50, Mushfiqur Rahim 31; Luis Reece 3-33) beat Chittagong Vikings 124 in 19.2 overs (Stiaan van Zyl 27; Qazi Onik 4-17) by 33 runs.Sammy, Onik star as Kings knock Vikings out of BPL 2017