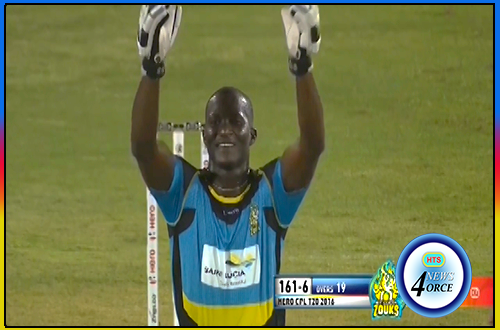 KARACHI, Pakistan (CMC) — Darren Sammy will oversee Peshawar Zalmi’s title defence after being appointed captain of the franchise for the third edition of the Pakistan Super League (PSL), set to bowl off next February.

The two-time Twenty20 World Cup-winning captain guided Zalmi to the title last season after taking over from Pakistani star Shahid Afridi and was widely praised for his leadership.

Franchise owner Javed Afridi said the decision to retain the former West Indies captain had been made following a meeting with team management.

“We discussed various options and reached a conclusion that there’s no better choice than Darren Sammy to lead the side,” Afridi told media here.

“He has a major role in Peshawar Zalmi as well, on and off the field. He has been a great source of motivation for all the players.”

The 33-year-old Sammy also found himself a huge fan favourite after choosing to make himself available for last season’s PSL final when it was controversially hosted in Lahore, while other foreign players opted out amidst security concerns.

He returned to Lahore as part of a World XI for a historic three-match series against Pakistan last September, which proved seminal in helping the Pakistan Cricket Board to convince the international community to resume tours of the country.

Sammy, shockingly axed as Windies captain four months after leading the Caribbean side to an unprecedented second T20 World Cup in India, will lead a Zalmi squad which includes former teammate Dwayne Bravo, who was picked up in the PSL draft last Sunday.

Windies openers Andre Fletcher and Evin Lewis will also be available as supplementary players, while Barbadian-born England all-rounder, Chris Jordan will also turn out for Zalmi.