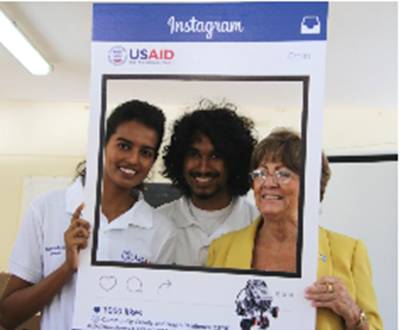 [Press Release] A female student of the Sir Arthur Lewis Community College (SALCC) has been singing the praises of an ongoing Coding and Robotics Pilot Project on the island.

Reshul Narhari, who gave remarks at the launch of the programme some two months ago, is a member of the Saint Lucian Robotics Team that participated in Saint Lucia’s first ever robotics competition last year, and a youth mentor in the STEM programme being delivered to 281 secondary school students from the four schools selected for a pilot program to introduce coding and robotics to secondary schools.

The four schools – Bocage Secondary, Soufrière Comprehensive, Beanfield Secondary and Grande Rivière Secondary – were selected by the Department of Education under the Community, Family and Youth Resilience (CFYR) Program, a project funded by USAID to build the skills and resilience of young people in Saint Lucia.

Narhari, who has gained recognition for her contribution to coding and robotics and a “Girl in ICT”, encouraged the participating students to “Keep coding, keep building, keep innovating,” as they continue to be given immeasurable support to develop the skill under the Coding and Robotics Pilot Project.

“Coding and robotics,” Narhari said, “cultivates innovative, analytical and creative thinking in the youth of Saint Lucia, as well as teaching them important life skills such as logical thinking and team building.”

The students, 144 girls and 137 boys, are being taught coding and are using Lego Mindstorms kits to build robots that they operate by computer programs they have developed.

“We can already see improvements based on the sessions our teachers have had with their students in the four schools over the past few weeks. Such progress brings us one step further in the sustainable development of our nation,” said Narhari.

She said, through the programme students have been given an opportunity to dream, to learn, to think big, to innovate and to implement. She said a chance to blossom in the programme is a chance for students to develop a great future in STEM.

STEM is a curriculum based on the idea of educating students in four specific disciplines — science, technology, engineering and mathematics — in an interdisciplinary and applied approach. Rather than teach the four disciplines as separate and discrete subjects, STEM integrates them into a cohesive learning paradigm based on real-world applications.