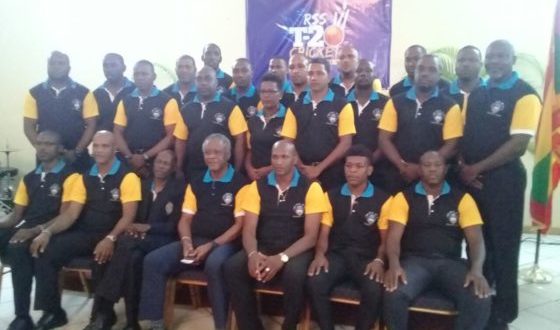 Press Release:-  Saint Lucia Police got their first hold of the Regional Police T20 Championship Trophy with a nine run victory over Grenada Police in the final of the competition played at Progress Park, Saint Andrew’s, Grenada on Monday, April 2, 2018.

Saint Lucia won the toss and decided to bat first, rattling up 170 for four off their 20 overs with Shervin Charles blasting 83 off 60 balls with four fours and six sixes. Captain Esau Gabriel struck 28 and Johnson Charles contributed   19. Denlee Anthony was 17 not out. Laurie Williams bagged two for 41 bowling for the Grenadians.

In reply Grenada was dismissed for 161 in 19.4 overs. Roland Cato top scored for Grenadians with 51 off 23 balls comprising five fours and three sixes. Ronald Etienne contributed 38, Josh Noel 26 and Randol Garcia 12.  Shervin Charles turned in a match winning all round performance grabbing four for 19 and Johnson Charles claimed two victims for 28 runs.

(Captain of the team- Esau Gabriel)

Grenada’s Lindon Lawrence was named Most Valuable Player of the tournament.

Meantime a delighted Minister for Home Affairs, Justice and National Security Honourable Hermangild Francis who accompanied the contingent from the outset has congratulated the local Police team and the organizers of the overall tournament, which he believes was seamlessly put together. Minister Francis says he is quite pleased to have been in a position which allowed him to assist in mentoring and motivating the team of cops to capture victory for the first time.

(Minister congratulating  Shervin Charleson  on bowling the fastest over)

Minister Francis is himself a former national player and cricket enthusiast. He also took time to wear his official hat, attending the swearing in ceremony of the new Grenada Government on Sunday, March 26, 2018 at the National Grenada Stadium, formerly known as Queens Park.

The Royal Saint Lucia Police Force Cricket team left Saint Lucia on Saturday, March 25, 2018 to participate in the upcoming Regional Tournament which bowled off in fine fashion with an official opening ceremony on Monday, March 26, 2018 at the Grenada Trade Center Annex. The tournament was hosted this year by the Royal Grenada Police Force. Five teams participated this year namely: Grenada (host), Barbados, St. Lucia, St. Vincent and the Grenadines, and Trinidad and Tobago.

St. Lucia’s team is as follows: