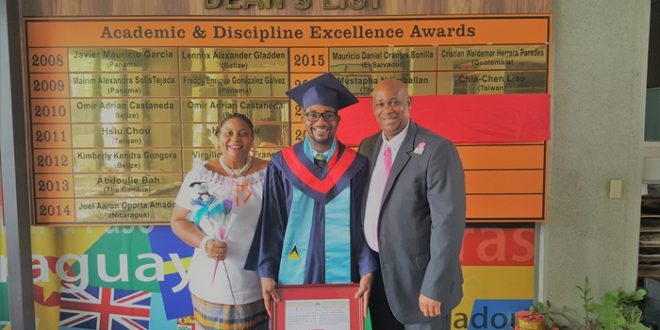 St. Lucian student Jehlani St. Clair, hailing from the community of Massacre, Anse-La-Raye, graduated from National Pintung University of Science and Technology with a bachelor’s degree in Tropical Agriculture.

The ceremony which was held on June 17th, 2017 was attended by His Excellency, Mr. Hubert Emmanuel, Ambassador of St. Lucia to R.OC.-Taiwan.

Also in attendance was Mrs. Theresa Blasse St.clair, proud mother of the graduate. Mr. St. Clair was presented with the award for Academic Excellence, making him the top performer in his department.

This achievement comes as no surprise as Mr. St. Clair has continuously displayed a zealous attitude towards his studies. In addition, he has taken on the role of cultural ambassador by participating in several performances representing St. Lucia and is often seen at the forefront of St. Lucian activities namely the Jounen Kweyol festivities.

Mr. St. Clair expressed the following, “My hope was that I would make St. Lucia proud. What really inspired me and kept me going was my family and friends. When you move far away from home, you realise that you miss out on special moments with your family and friends. Therefore, I believe that I already travelled so far from my home, that I could not afford to waste any time and that I should make sure that it was worth the sacrifice.”

Mr. St. Clair plans to further his studies in Taiwan and looks forward to beginning another chapter in his career.