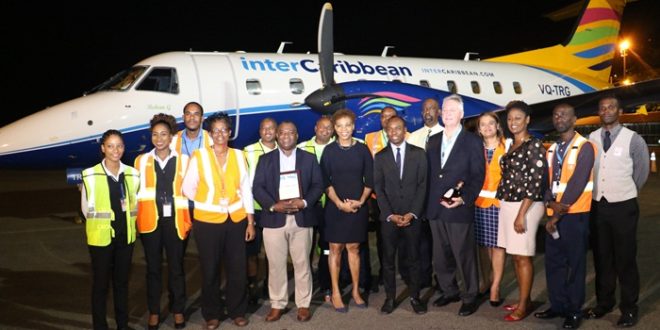 [PRESS RELEASE] The inaugural flight of InterCaribbean Airways arrived at the George FL Charles Airport, on Thursday, March 22, at 6:55 pm, from the island of Dominica.

The honoured guests included airline Owner and Chairman Lyndon Gardiner along with CEO Trevor Sadler. Guests were greeted with steel band music and welcome refreshments upon disembarking the aircraft.

The new route will be serviced by an Embraer EMB120, with a seating capacity of 30. The flights will arrive from DOM at 6:55 pm on Sunday, Monday and Thursday and depart from SLU at 9:00 am on Monday, Tuesday and Friday. The service provides onward connections to the northern Caribbean including the BVI reaching as far north as Havana with an additional direct service to Saint Croix commencing on April 12.

Speaking on the airlines role in regional travel Owner/Chairman Lyndon Gardiner stated, “Our dream is connecting the entire Caribbean, we feel that once we have better air connectivity we will be able to have better integration and be able to market the Caribbean as a single destination, offering more multi-destination vacations in our region.”

The airport’s proximity to the island’s main business hub and largest cluster of hotels makes it the ideal point of entry for regional travel. In 2017 the Caribbean market overtook the United Kingdom as the second largest producer of stay-over arrivals, generating 76,349 or 19.8% of total stay-over arrivals to the destination.

Minister of Tourism, Information and Broadcasting the Hon. Dominic Fedee commented on the value of the increased airlift saying, “We look forward to the opportunities that this flight allows, which connects us to even more gateways across the Caribbean.”