Saint Lucia takes stand against corruption at Summit of the Americas

Press Release:–  The Eighth Summit of the Americas in Lima, Peru, from April 13 – 14th 2018, raised issues related to “Democratic Governance Against Corruption”.

Saint Lucia’s Prime Minister, Honourable Allen Chastanet, in his statement at the Summit noted that “Leadership is called on to practice responsible and good governance by denying corruption a foothold.”

The Prime Minister stressed that the responsibility for social advancement of the people of the Hemisphere through sustainable economic growth is a daunting task that demands transparency and accountability of processes and institutions.

Speaking specifically to Saint Lucia, the Prime Minister focused on steps the Government has already taken to improve good governance. He noted that the administration had required that Ministers, Permanent Secretaries and Board Members of statutory agencies take and pass governance courses. He also spoke to the amendments to the Crown Proceedings Act to enable the recovery of public funds with no statute of limitations. Saint Lucia has also recently signed the OAS’s Mechanism for Follow-Up on the Implementation of the Inter-American Convention against Corruption (MESICIC). 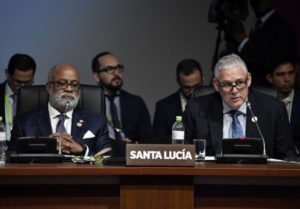 A constant advocate for Small Island Developing States (SIDS), Prime Minister Chastanet, explained that “despite best efforts” SIDS “are at times being unfairly singled out by countries and institutions that try to impose upon us rules and regulations that were themselves derived from a non-transparent process.”

The Prime Minister pledged Saint Lucia’s commitment to openness and implored the international community to recognize that transparency should not be so onerous that it takes precedence over development.

“Impractical and subjective mechanisms are unsustainable,” he noted while calling for a collective effort, a better integration of systems and sharing of data and knowledge.

“We must value our democracies which are inherently based on one-citizen one-vote, thereby entitling each and every person the expectation that government will manage the public good, and provide essential services to secure their present and future,” said PM Chastanet. “The people must trust their elected representatives to be transparent and accountable to them as citizens.”